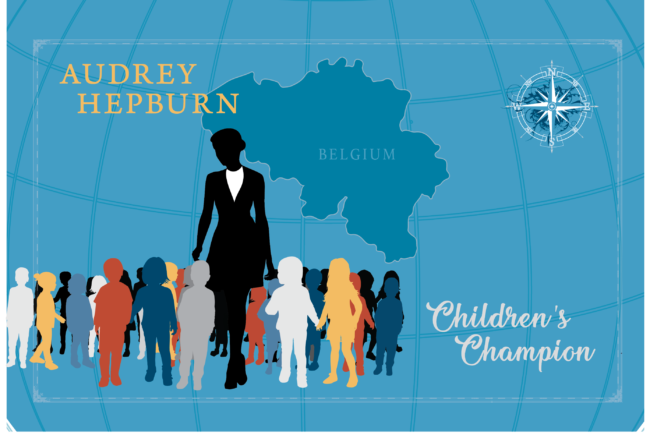 “There is a moral obligation that those who have should give to those who don’t.” – Audrey Hepburn

Although best known for starring in Breakfast at Tiffany’s and other iconic films, Audrey Hepburn was much more than an actress and a fashion icon; her experience living through war at a young age motivated her to pursue humanitarian efforts throughout her life.

Born in Brussels, Belgium, Hepburn attended school in England as a child before moving to the Netherlands with her mother in hopes of escaping World War II. After experiencing years of food shortages before Holland was liberated in 1945, Hepburn gained a new appreciation for giving back to those in need.

After the war, she pursued her passion for dancing, branching into modeling and acting as well. At 22, Hepburn immigrated to New York to star in a Broadway production, kicking off a successful film career in the U.S. that would earn her numerous awards, including Oscars, Golden Globes, a Grammy and an Emmy.

After Hepburn experienced hunger and malnutrition during the war, the United Nations Relief and Rehabilitation Administration brought her food, clothing and medication. Grateful for the positive impact the relief agency had on her life, Hepburn felt it was her moral obligation to give back now that she had the means to do so. As her film career was coming to a close in the late 1980s, Hepburn focused her efforts full time on philanthropy, becoming a Goodwill Ambassador for the United Nations International Children’s Emergency Fund (UNICEF).

After her first mission trip to Ethiopia as a Goodwill Ambassador, Hepburn used her celebrity status for good by participating in dozens of media interviews, reaching audiences across the globe about the critical help UNICEF provides to impoverished nations. She believed communication was key to spreading the word and raising awareness of the importance of taking action to save lives, and she remained a strong public advocate for social change.

In the following years, Hepburn visited many more countries as an ambassador for UNICEF, including Turkey, Venezuela, Ecuador, Guatemala, El Salvador, Bangladesh, Thailand, Vietnam and Sudan. Her work helped provide everything from access to food and water to polio vaccinations and educational opportunities.

When she wasn’t in the field, Hepburn used her voice to promote UNICEF’s mission by launching its State of the World’s Children reports, testifying before Congress, participating in benefits and fundraisers, and giving speeches.

Hepburn had a lasting impact on Hollywood as well as on the lives of countless children and families, and her tireless efforts to use her voice to draw attention to the harmful conditions that people face did not go unnoticed. Her dedication to activism and her role as a UNICEF Goodwill Ambassador earned her a Presidential Medal of Freedom in 1992 — a year before she passed away due to cancer.