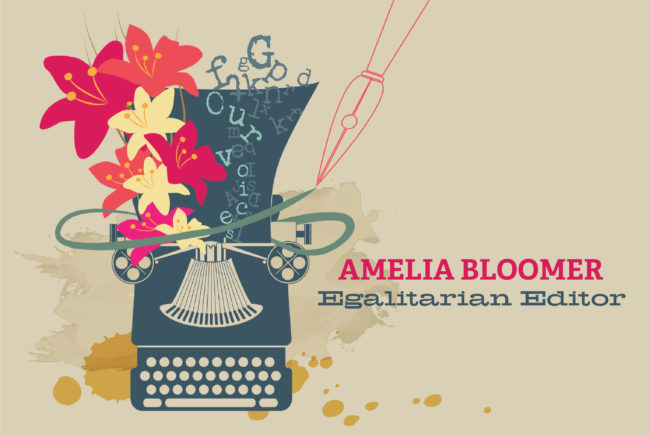 “It will not do to say that it is out of woman’s sphere to assist in making laws, for if that were so, then it should be also out of her sphere to submit to them.” – Amelia Bloomer

Although she was well-known for supporting gender equality with her progressive adoption of less restrictive clothing styles for women — including pantaloons, now known as “bloomers” due to her influence — Amelia Bloomer’s involvement in social activism did not stop there. Her interest in advocacy spanned many subjects, and she quickly learned writing and public speaking were the ideal methods for amplifying her voice and communicating her support for causes she cared about.

After beginning her career as a teacher in her hometown of Homer, New York, Bloomer got married and moved to Seneca Falls with her husband, Dexter, the editor of the Seneca Falls County Courier.

Bloomer became interested in public affairs and immersed herself in political and social matters. After she joined a church and began to volunteer with the local temperance society, Dexter encouraged her to start a column in his paper on social reform for women to increase awareness of the importance of equality.

In 1849, inspired after attending the Seneca Falls Women’s Rights Convention, Bloomer founded The Lily, the first newspaper for women, edited by women. She published articles advocating for women’s rights, temperance, suffrage and education, giving women a voice on critical issues and influencing how gender roles were perceived at the time.

Bloomer and her husband moved a few years later, offering her the opportunity to reach new audiences and campaign for women’s rights by communicating her message through public speaking in major Midwest cities from Chicago to St. Louis.

In 1854, Bloomer and her husband settled in a more conservative town in Ohio, prompting her to sell The Lily — but her dedication to communicating for social change didn’t falter. She continued on her lecture circuit and had articles published in local newspapers, eventually relocating to Iowa and serving as the president of the Iowa Suffrage Association from 1871 to 1873.

A lifelong proponent of women’s rights, Bloomer used her communications skills to change the way women thought about themselves. Her voice helped create a more inclusive world wherever she went, encouraging women to fight for equality in everything from financial matters and clothing choices to education opportunities and politics.