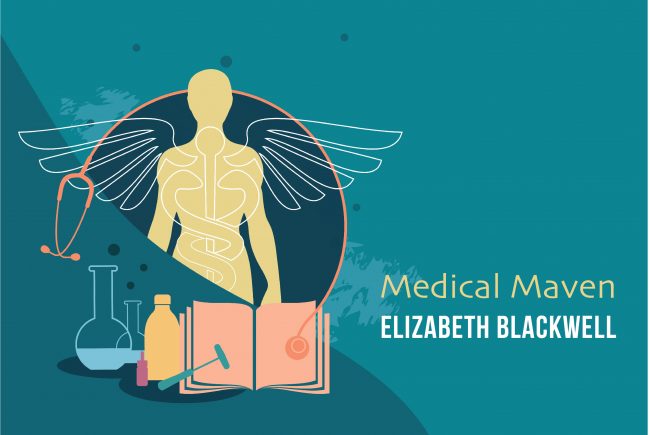 “If society will not admit of woman’s free development, then society must be remodeled.” – Elizabeth Blackwell

Elizabeth Blackwell’s dedication to social activism began with her father, a strong supporter of women’s rights who ensured that his daughters received the same educational opportunities as his sons.

Inspired by her father’s progressive views, Blackwell realized she didn’t want to be a teacher, as was common for women at the time. After a dying friend said she wished her doctor had been a woman, Blackwell set her sights on medicine and became the first woman in the United States to earn a medical degree.

At the time, there were no medical schools that accepted women. Undaunted by the challenge, Blackwell convinced friends who were physicians to let her study medical texts with them before she applied to schools across the Northeast. After receiving many rejections, she was accepted to Geneva Medical College in New York.

Blackwell continued to face discrimination and obstacles as a female student. However, she eventually earned the respect of her professors and peers and graduated first in her class in 1849.

After college, Blackwell continued her training in European hospitals until she contracted a disease from a patient that left her blind in one eye. Although she had to abandon her dream of becoming a surgeon, Blackwell returned to New York and opened a private practice in 1851.

In 1857, Blackwell opened the New York Infirmary for Women and Children with her sister — who also had become a doctor — and another colleague to provide training opportunities for other female physicians to expand their knowledge and skills. In 1868, she opened the Woman’s Medical College of the New York Infirmary to provide more formalized training for women entering medicine.

A few years later, Blackwell stopped practicing medicine and dedicated the rest of her life to lecturing, writing and campaigning. She published several books about women in medicine and advocated for disease prevention through proper hygiene. As a pioneer for women in medicine, Blackwell used her communication and advocacy skills to bring attention to the women’s rights movement, corresponding with suffragists and encouraging women to seek an education.

Blackwell believed that men and women should be held to the same standards of behavior. Throughout her career, she defied accepted gender roles and championed equal education opportunities for women, inspiring change and increasing awareness about the importance of an inclusive society.