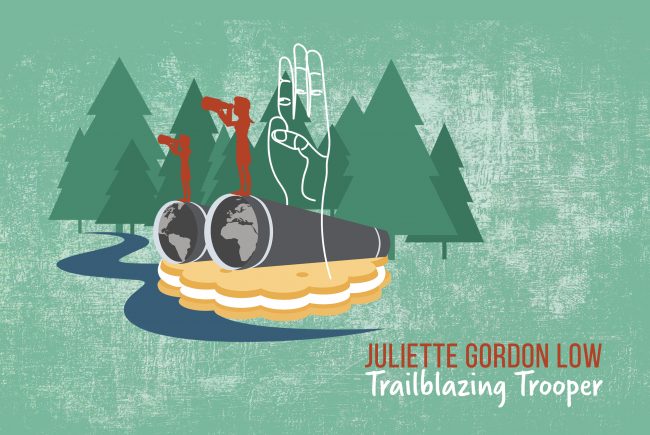 “The work of today is the history of tomorrow, and we are its makers.” – Juliette Gordon Low

When Juliette Gordon Low founded the Girl Scouts in 1912, she wanted to empower girls everywhere to reach their full potential and foster an inclusive place where they could grow as individuals. Today, her vision of promoting courage, confidence and character in girls who go on to make the world a better place is kept alive through the organization’s 2.6 million members.

Low’s education taught her to value leadership traits and to be loyal, honest and responsible. After meeting with Boy Scouts founder Lord Robert Baden-Powell during her time spent traveling in England, Low partnered with him to create the Girl Guides — a leadership organization for girls similar to the Boy Scouts — in London and Scotland.

After an enthusiastic response from girls in the United Kingdom, Low was excited to bring the movement to her hometown of Savannah, Georgia. In 1912, the first troop of 18 girls — renamed as the Girl Scouts — was formed. Low invited girls from all backgrounds and cultures to participate to ensure they all had an equal opportunity to be included in the experience.

During their troop meetings, the girls earned badges after learning a variety of skills, from first aid to cooking. However, Low also understood the importance of skills that would serve girls in their future professional roles; in addition to helping them master practical household skills, she taught them about business, the arts and science.

Low’s social connections, combined with her communications and networking skills, led the Girl Scouts to success early on. In 1913, a year after the first troop was founded, membership expanded into other states, a national headquarters was created in Washington, DC, and Low published the handbook How Girls Can Help Their Country.

During World War I, Low made trips to England and volunteered with the American Red Cross, working with the Girl Scouts to raise money to support refugees and soldiers. After the war, in 1918, she went back to England to work on strengthening the Girl Guides’ connection to the Girl Scouts.

Serving as the American representative on the International Council of Girl Guides and Girl Scouts in London a year later, Low helped form troops all over the world — from China to South Africa. In recognition of her tireless efforts on behalf of the Girl Guides, Low was given the organization’s Silver Fish award, its highest honor. The following year, Low stepped down as president of the Girl Scouts of America and dedicated herself to promoting the organization’s international development.

Low was posthumously awarded the Presidential Medal of Freedom in 2012 and was inducted into the National Women’s Hall of Fame in 1979. Today, Low’s legacy is kept alive through the thriving Girl Scout troops in countries around the world. Since its founding, the organization has had more than 50 million members — including 60 percent of women in Congress and every female secretary of state in U.S. history — reaching generations of women whose lives have been positively impacted by Low’s determination to promote the Girl Scouts and make the world more inclusive for girls everywhere.