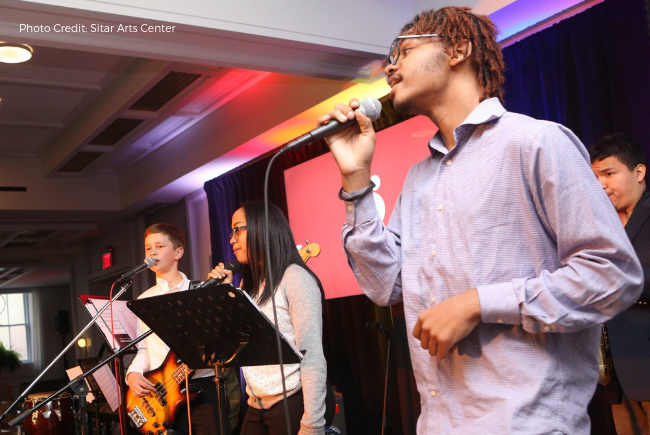 If you live in the Adams Morgan neighborhood, open your windows the evening of April 25. You may just be able to hear the Sitar Arts Center’s band – known as The Saints – as they play the organization’s signature fundraiser at the LINE DC Hotel.

The Saints, formed in 1999 within Sitar’s After school Arts Program, have been led these last two decades by Joe Link, who has seen the students thrive in their musicality, self-esteem, pride and their sense of belonging.

“Being a part of a group ensemble has bolstered their camaraderie, enabling them to collaborate, because they all are a family,” he says. “They love playing together and sharing their art with the community.”

But being part of the Saints comes with certain obligations:

Sitar Arts Center provides essential services that support working families by providing a safe environment that includes arts classes, after school programs, summer camps and internships.  Its arts education program not only introduces students to different art media, but also teaches essential skills that prepare them to be workforce-ready and to succeed in life.

Saints Band members can start as early as 2nd grade. It currently comprises nine students, who play viola, violin, trumpet, piano, bass and drums. It has two vocalists. One member has been in the band for six years.

“[Being in the band] helps them in sports, it helps them in academics, being on time, being responsible,” says Lorraine Robinson, Sitar’s Senior Director of Programs. “At Sitar we measure toward 21st century life skill outcomes, which include accountability and initiative, collaboration, and critical and creative thinking. We see student growth in all of these areas.”

Beyond their time at Sitar, participation in the Saints Band also has impacted their futures. The Band has become a springboard for career goals, be they centered on music or other avenues. According to Link, “the foundation of music is a stabilizing and propelling platform for their lives. The students are very talented (some at still young ages) and they commit themselves to the band.”

Some Sitar alums have made music and music education their profession. Link says it’s heartening to see how they are teaching and inspiring the next generation.  The success stories are many:

So, what is in the Saints’ special sauce? Robinson says it’s Joe Link.

“Joe is a gift to the students,” she says. “He accepts the students as they are and meets them where they are, and then he develops them over time, both as musicians and in becoming the amazing people that they are.”

If you’re looking to catch a Saints show, the group performs regularly in the Sitar student showcase and the Sitar Café series, held at the organization’s Kalorama Road center. But they can also be found at PorchFest, fundraising special events, Adams Morgan Day, Community Organization holiday parties, Millennium Stage, and more.

For those lucky enough to score a ticket to the gala, themed Seasons of Sitar, at the LINE DC Hotel, you can expect to see a vibrant group of current music students and returning alumni do something they love, together.

“I am excited to see how the audience receives our students’ music and experience that vital exchange that happens between creative artists and their audience,” says Link. “It is a gift for others and it’s a joy and a gift to themselves as that music is now a part of their lives forever.”

Sitar is committed to being an artistic home for more than 900 students from all D.C. wards and neighborhoods.Visit here if you would like to donate to Sitar.