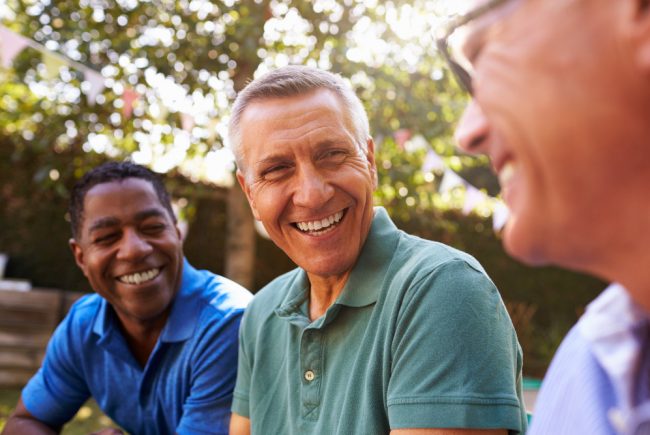 We know that it takes a village to raise a child, as the saying goes. At Vanguard, we also know that it takes a village to talk with men about their health. Men learn and talk about their health — and even make health decisions — based on the cues they get from their communities. As communicators and storytellers, we need to understand this behavior as we develop public health campaigns to reach men.

June marks Men’s Health Month. According to MensHealthMonth.org, the month “gives health care providers, public policy makers, the media and individuals an opportunity to encourage men and boys to seek regular medical advice and early treatment for disease and injury.”

This month also provides an opportunity for communicators to understand how men learn about issues related to their health — and if we are doing enough to reach them.

If you have a father or male significant other, you may not be surprised to hear that many men don’t like to talk about their health. An AARP article described data from a 2016 study by the Cleveland Clinic that found that 53% of men said they don’t talk about their health, which creates a high barrier for communicators to overcome when developing public health campaigns for men.

Vanguard has taken a closer look at this issue through our work with the University of South Florida (USF) as part of an initiative funded by the Movember Foundation. We support the initiative through the development of a five-year national media impact evaluation in which we examine how discussions around mental health in media shift knowledge, attitudes and behaviors in men and boys. We found that men’s connections in their communities play the biggest role in how they learn about and take action concerning their own mental health.

This is particularly true in communities with shared experiences. Through our work with USF, we learned about communities such as City Heights in San Diego, California, which has the highest number of Somalian East African refugees in the state, with just more than 33,000 in their community. After 10 men in the community died by suicide in a five-year period, community leaders took a proactive approach to addressing the mental health of men and boys. They created men’s health campaigns that engaged the entire community in shifting mindsets around mental health and worked together to create resources and spaces for young men to talk about their mental health and find treatment. Within the campaign’s first year, young men became more engaged in the conversation around improving their own mental health.

The City Heights example reinforces that when it comes to men’s health, educating a community is just as important as educating men as individuals. Communities are an important resource for men and can facilitate behavior changes that support healthy actions.

So, how can communicators educate communities? We need to ask important questions to ensure our campaigns reach the members of a community who have a direct impact on how men perceive and act on their health: Are we using the right channels? Are we going to places where men feel they can talk openly about their health? Does the community know enough about men’s health to provide support? Are we building trust among men in the community so they feel comfortable talking about their health?

Answers to these questions can identify what channels in a community you should use for your campaign strategy to support men in addressing their health. Talking to men about their health isn’t always easy, but at Vanguard we’ve learned that conversations about men’s health that include the entire community make it easier for men to talk, listen and take steps to lead healthier lives.