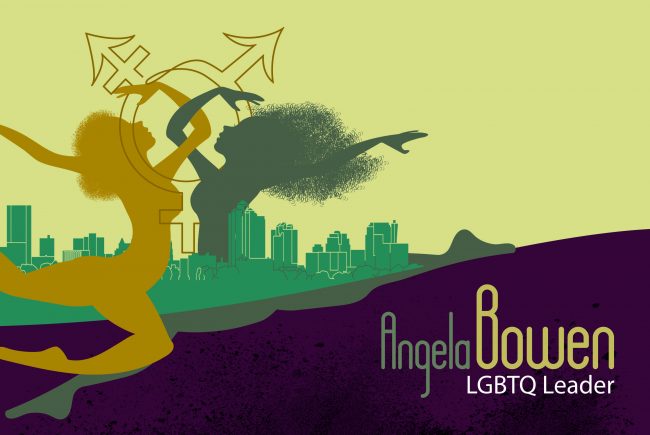 “I’m a black, lesbian, feminist, writer, activist. I see all of those as equal functions. I feel as though I’ve got a mission to be out front.” – Angela Bowen

When her marriage and dance career ended at age 46, Angela Bowen didn’t have regrets; her life as an advocate for lesbian, black and women’s rights issues had just started.

At her mother’s urging, Bowen enrolled in a dance program at the Elma Lewis School of Fine Arts in Boston at age 14 to improve her posture. She learned to love dance, and several years later, she left to join a musical revue in Europe that featured the evolution of black American music.

She put her tenacity and activist spirit to use for the first time while she was on tour. After performing barefoot on a poorly maintained wooden stage, the dancers were left with splinters in their feet. Unwilling to stand for this mistreatment, Bowen led a successful strike so the dancers would have sandals incorporated into their costumes.

Shortly after the tour, she returned to the United States, married drummer Ken Peters and opened a dance school with him. From 1963 to 1982, Bowen taught at the Bowen/Peters School of Dance in New Haven, Connecticut, providing many low-income black students with the encouragement and confidence they needed to spark their ambition — all at no cost.

After the dance school closed, a new chapter of Bowen’s life started. She divorced Peters, came out as a lesbian and met Jennifer Lynn Abod, who became her longtime partner. Bowen became a board member, co-chair and editor of the National Coalition of Black Lesbians and Gays’ magazine, writing articles and speaking at rallies and marches on the importance of equal rights. She strongly advocated for a more inclusive and accepting society, denouncing sexism, racism and homophobia.

In the 1990s, Bowen set out to achieve a new goal: influencing a new generation of feminists. She earned a master’s degree at Clark University in 1994 and a doctorate in women’s studies three years later. After completing her studies, she took her career in a new direction and joined the faculty of California State University, Long Beach, teaching in the English and women’s, gender and sexuality studies departments.

After more than 30 years together, Bowen and Abod married in 2013. Three years later, Abod directed a documentary titled The Passionate Pursuits of Angela Bowen to share her wife’s compelling story and inspire action in others to pursue their own goals with the determination and courage that Bowen modeled throughout her life.