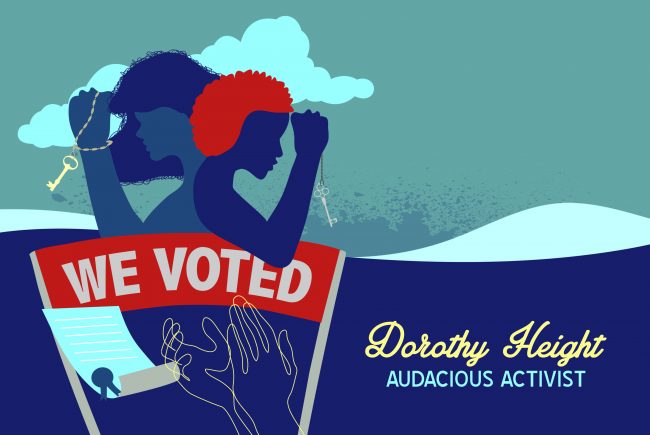 “We cannot afford to be separate. We have to see that all of us are in the same boat.” – Dorothy Height

Dorothy Height’s interest in social justice began in high school after she discovered her talent as an orator while discussing political matters. She used her skills as a communicator to advocate for anti-lynching campaigns and received a college scholarship after winning a national public speaking competition.

After graduating from New York University with a bachelor’s degree in education and a master’s degree in psychology, Height took a job as a social worker in Harlem. Soon after, she began her career as a civil rights activist and joined the National Council of Negro Women (NCNW) and Harlem Young Women’s Christian Association (YWCA), hoping to inspire change and create new opportunities for other African-American women.

Height was named president of NCNW in 1957, a position she held for 40 years. Under her leadership, the organization advocated for issues ranging from voter registration in the South to ending lynching.

Height made more progress as a political adviser for First Lady Eleanor Roosevelt, President Lyndon B. Johnson and President Dwight D. Eisenhower during the civil rights movement in the U.S. She advocated for desegregation and the inclusion of more African-American women in government leadership positions. Using her oratory skills, Height often served as a mediator between African-American and white women in politics to promote a solutions-oriented dialogue.

In 1963, Height was one of the key organizers on the front lines of the March on Washington, although she was not invited to speak because she was a woman.

Height was an advocate for social issues into her 80s, using her experiences as a social worker to provide an expert perspective on women’s issues for local, state, and federal government committees.

Throughout her successful career as a civil rights leader and community organizer, Height received many awards recognizing her accomplishments, including the Presidential Citizens Medal in 1989, the Presidential Medal of Freedom in 1994, and the Congressional Gold Medal in 2004.

Called the “godmother of the civil rights movement” by President Barack Obama after her death, Height was a courageous and outspoken influencer. She paved the way in focusing on women’s rights while also considering the rights of the African-American community, dedicating herself to helping to create a more inclusive country by expanding opportunities for African-American women in politics.