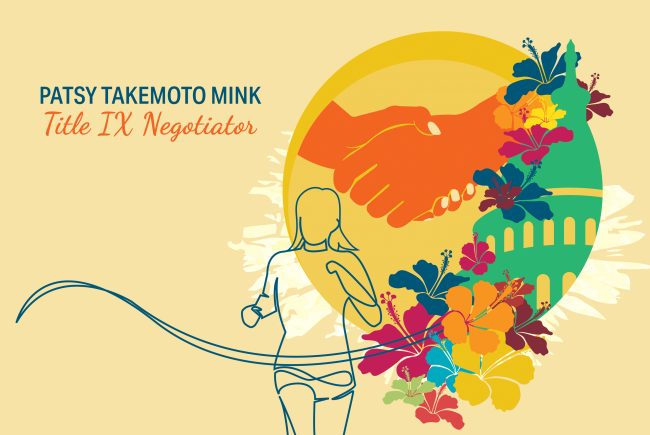 “We have to build things that we want to see accomplished, in life and in our country, based on our own personal experiences … to make sure that others … do not have to suffer the same discrimination.” – Patsy Takemoto Mink

As a teenager and third-generation Japanese American living in Hawaii, Patsy Takemoto Mink developed a passion for leadership in high school, when she was elected student body president. She graduated in 1944 as class valedictorian, heading to college with the goal of having a career in medicine.

Unfortunately, no medical schools would accept women at the time. Disappointed but undeterred, Mink set her sights on making the U.S. a more inclusive place by changing discriminatory legislation. After graduating in 1951 from the University of Chicago Law School, she became the first Japanese American person to practice law in Hawaii.

As a Congresswoman, Mink worked to eliminate the racial and gender discrimination she faced as a woman of color, championing the equal rights of women, immigrants and children and advocating for social and political inclusion.

During her time representing Hawaii’s 2nd Congressional District in Congress from 1965 to 1977 and 1990 to 2002, Mink tirelessly negotiated for legislation that would leave a lasting impact on our nation. As the primary advocate for the Title IX Amendment of the Higher Education Act, she advocated for the groundbreaking legislation — facing opposition every step of the way — that brought equal funding for women’s academic and athletic programs to federally funded institutions, as well as the first comprehensive Early Childhood Education Act and the Women’s Educational Equity Act. She also created influential coalitions to promote health care, education and welfare for individuals in need.

After her death in 2002, Title IX was renamed the Patsy T. Mink Equal Opportunity in Education Act, and she was inducted into the National Women’s Hall of Fame in 2003. Mink also was awarded a posthumous Presidential Medal of Freedom in 2014.

Although Mink passed away in late September, she was still re-elected to Congress after her name was left on the November ballot — a testimony to the impact she left and how her dedication and tenacity blazed new trails for women of color in politics, advancing equal rights and overcoming barriers to achieving education and career goals.

For additional information on Mink’s contributions to sports equality, check out this earlier blog post.