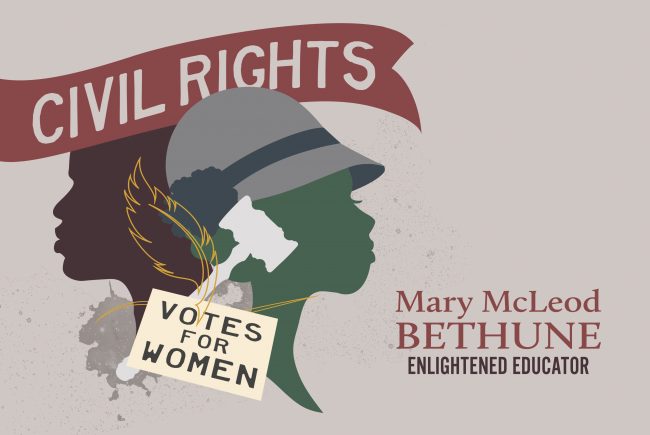 “We have a powerful potential in our youth, and we must have the courage to change old ideas and practices so that we may direct their power toward good ends.” – Mary McLeod Bethune

As the daughter of former slaves, Mary McLeod Bethune appreciated all the opportunities that education afforded African-American individuals like herself in the U.S. She was inspired to learn all she could at a young age, leading her to become a prominent African-American educator and women’s rights advocate.

Bethune attended the only school for African-American students in Mayesville, South Carolina. With the help of her teacher and mentor, she secured a scholarship to Scotia Seminary in North Carolina. After continuing her education at Dwight Moody’s Institute for Home and Foreign Missions in Chicago, she found that no church was willing to sponsor her as a missionary in Africa, so she returned to South Carolina to teach in 1895.

Bethune’s career as an advocate for racial and gender equality took a political turn in 1920 after women won the right to vote. She led voter registration drives and encouraged African-American voters to join the Democratic Party. In 1935, Bethune founded the National Council of Negro Women, serving as its president with the goal of ending segregation and discrimination.

The following year, due to her experience as an influential communicator, Bethune was named Director of Negro Affairs of the National Youth Administration by President Franklin Roosevelt. In this position, she became the highest ranking African-American woman in government. She also served as President Roosevelt’s adviser on issues that African-American people faced, such as campaigning to end lynching.

Remembered as the “First Lady of Struggle,” Bethune organized conferences, wrote for national African-American newspapers and served on advisory boards to work toward a more inclusive future. Her legacy lives on today as an educational and political pioneer, thanks to her tireless efforts advocating for African Americans to have the chance to reach their full potential by receiving equal opportunities in school and society.