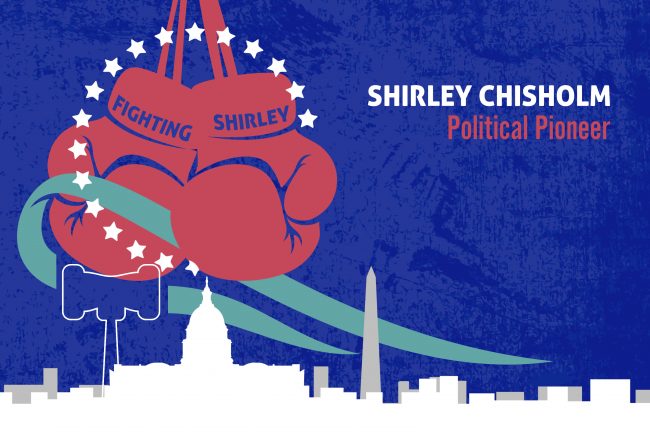 “I want to be remembered as a woman … who dared to be a catalyst of change.” – Shirley Chisholm

When Shirley Chisholm’s professors urged her to consider a career in politics due to her tenacity and debating skills, she initially refused, saying that as an African-American woman she had a “double handicap.”

Instead, Chisholm began her career as a teacher in 1946, later earning a master’s degree in elementary education from Columbia University and becoming an educational consultant for New York City’s Division of Day Care. Soon after she began her job, she developed an interest in politics and how they affected her as a woman of color, so she joined local chapters of the League of Women Voters, the National Association for the Advancement of Colored People (NAACP), and the Democratic Party.

In 1964, Chisholm became the second African American to join the New York State Legislature. After winning a seat in the U.S. House of Representatives four years later, she began her first of seven terms and became the first African-American woman to serve in Congress. In 1969, she also helped found the Congressional Black Caucus.

Once there, she earned the nickname “Fighting Shirley” by advocating for dozens of pieces of legislation that promoted racial and gender equality and helped individuals facing financial difficulties. But her work wasn’t finished: In 1972, she made a bid for the U.S. presidency in hopes of having a bigger impact in her fight for social justice and equal education opportunities, becoming the first major party African-American candidate to do so. Although she did not win the Democratic nomination, her campaign inspired women of color who had doubted their potential to excel in white- or male-dominated industries.

Chisholm left Congress in 1983 to teach college courses involving women in politics and give lectures. She wrote two books, Unbought and Unbossed — which was her presidential campaign slogan — and The Good Fight.

As a champion of education and employment opportunities for minorities throughout her time in Congress, Chisholm is remembered as a major influence in paving the way for women of color in politics. Most recently, Ayanna Pressley, the first African-American woman to represent Massachusetts in Congress, was given Chisholm’s former office and expressed her honor to work in a space once occupied by her “hero.”