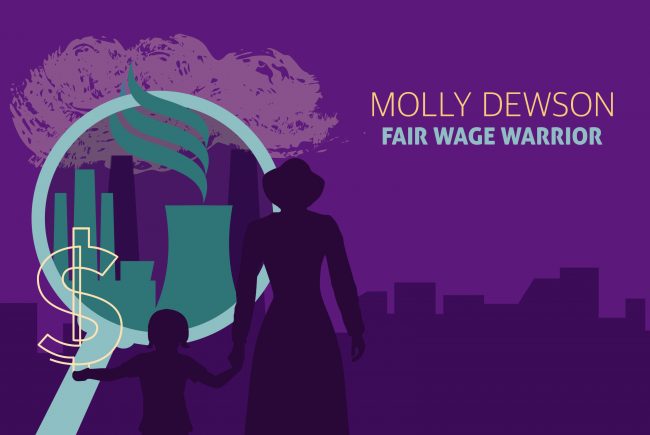 “[Before FDR, women] were just figureheads, symbols acknowledging that women had the vote. They waited for the go-ahead signal from the man who was responsible for their appointment.” – Molly Dewson

Molly Dewson’s interest in public affairs stemmed from her family. When Molly was growing up, her father encouraged her to read books on politics and government, and many of her female relatives were involved in social reform efforts.

Dewson graduated from Wellesley College in 1897, accepting her first job with the Women’s Educational and Industrial Union to look into improving conditions for female domestic workers in Boston. She later took a position with the Massachusetts Parole Department as a researcher to better understand the motivation behind juveniles’ crimes and how to encourage good behavior. After writing a paper on her findings and presenting it at a conference, she earned a reputation as an authority on the most effective rehabilitation strategies for girls who have committed crimes.

Dewson’s investigative career continued when she was named executive secretary of the Minimum Wage Investigative Committee and helped produce a report on industrial working conditions for women and children that earned her national recognition and led to the nation’s first minimum wage law.

After World War I, Dewson led the National Consumers League campaign to secure fair working wages for women, and as president of the New York Consumers League, she successfully lobbied for the passage of an act that limited women’s working hours to 48 hours a week.

Turning her attention to women’s issues in politics, Dewson became heavily involved in the suffrage movement and played a major role in Franklin D. Roosevelt’s presidential campaigns. In 1928, she held several leadership positions within the Democratic Party both in New York and on the national level to encourage women to participate in politics.

In her role as director of the Women’s Division of the Democratic Party in FDR’s presidential campaigns during the 1930s, Dewson rallied women to support him in the elections, as she believed his New Deal program would mean fair treatment for the working class. She used her communication skills to persuade women to become involved in critical political matters by creating the Reporter Plan, a national training program to educate women on the New Deal and garner support for the Democratic Party.

A dedicated activist within the Democratic Party and the suffrage movement, Dewson advocated for the causes close to her heart and inspired and informed women about their rights and opportunities, whether she was lobbying to establish fair wages and working conditions or encourage their involvement in politics to create a more inclusive society.