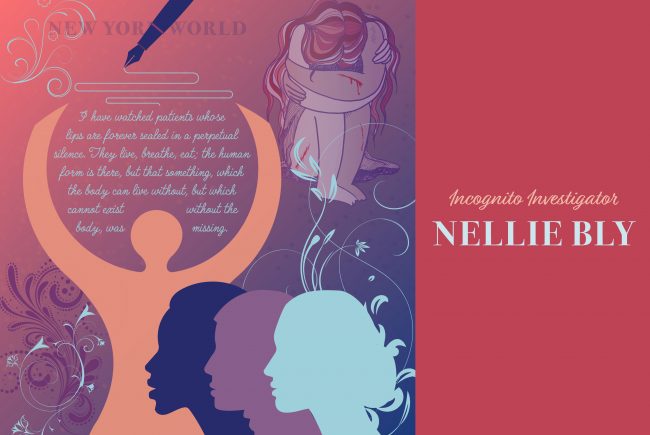 Elizabeth Cochrane first began using her pen name — Nellie Bly — while working as a reporter for the Pittsburgh Dispatch. From the start of her career as a journalist, she focused her work on human interest stories that uncovered corrupt practices involving discrimination against vulnerable populations such as women, immigrants and people with mental health needs.

In 1887, Bly moved to New York City and started a job at Joseph Pulitzer’s New York World. There, she completed one of her most notable exposés: She got herself committed to a mental health institution on what is now Roosevelt Island to report undercover on the poor conditions patients were forced to endure.

Her articles detailing her time in the institution were published across the country, first in newspapers and then as a book, revealing the shocking malpractice and abuse that patients experienced. Her call for reform led to a grand jury investigation, and new policies that introduced improvements to patient care and treatment were adopted soon after.

Bly’s reputation as a determined investigative journalist with unwavering integrity grew as she published more exposés. She was passionate about her work and the pursuit of justice, reporting on everything from poor conditions in jails to corruption in the New York State Legislature, where she exposed bribery in the lobbyist system.

A pioneer in her field, Bly was the most famous female reporter of her time. Her dedication and willingness to go the extra mile to shine a light on pressing social issues through her writing earned her recognition throughout her career as a communicator. Bly’s legacy can be seen in the work of many journalists today as they expose dishonest activity by those in power and the mistreatment of the most vulnerable among us, despite the risks these situations pose to their own safety.