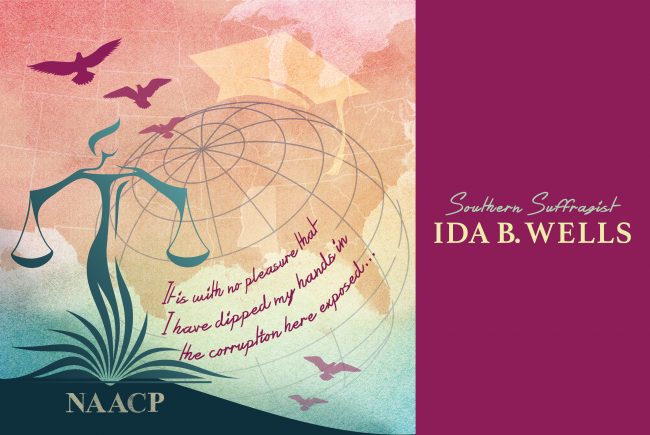 “The way to right wrongs is to turn the light of truth upon them.” — Ida B. Wells

Ida B. Wells’ groundbreaking journalism career began with a lawsuit. In her early 20s, Wells was ordered to leave the women’s car of a train and move to the smoking car — an action that she claimed violated the Civil Rights Act of 1875. Although she sued the railroad company and won in court, her case was appealed and reversed. This ignited Wells’ passion to shine a light on the unjust treatment that African Americans such as herself were facing.

Wells believed in the power of reporting the truth to effect change and positively impact people’s lives. At 25, she was already the co-owner and editor of a local black newspaper in Memphis, the Free Speech and Headlight. She used her platform to uncover and report racial inequality in the South, including a lynching of three of her friends.

Despite living in the Jim Crow segregation era and facing added discrimination as a woman, Wells was undeterred by danger and determined to investigate the injustices and violence happening around her. As the mainstream media negatively portrayed the African American community in the news, Wells researched and reported on hundreds of lynchings, collecting data and telling the true stories behind the incidents.

As more of her work was published, Wells received death threats and her newspaper office was burned by white supremacists, leading her to move to Chicago, where she continued her career as a civil rights journalist and activist. In 1909, she became a co-founder of the National Association for the Advancement of Colored People (NAACP). In addition, she worked closely with Susan B. Anthony in the movement for women’s suffrage.

Throughout her life, Wells continued to write, lecture and fight for the rights she had championed as an investigative journalist. Through her tireless and fearless efforts, she uncovered the truth and opened the world’s eyes to the discrimination and violence African Americans experienced in the South, even if that meant putting her safety on the line.