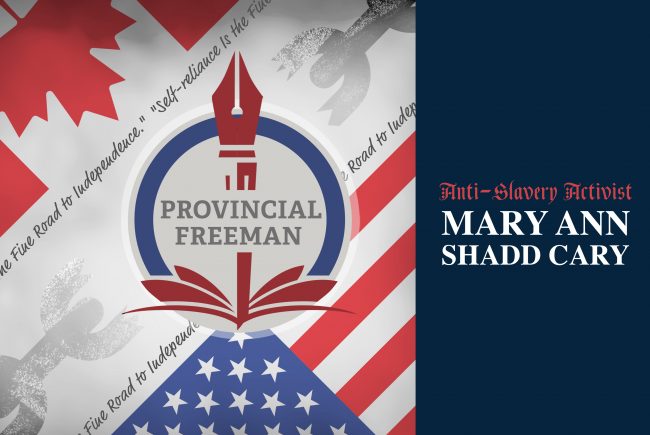 “I’m opening the door for you, for black women … I’m trying to create a space for you to have a voice.” — Mary Ann Shadd Cary

Mary Ann Shadd Cary was a beacon for social change and the fight for equality for African Americans in the United States.

Growing up in Delaware during the pre-Civil War era, Shadd Cary was a free African American woman with abolitionist parents at a time when countless individuals were enslaved in the South. And although they supported the anti-slavery movement, she didn’t feel it was doing enough to change the circumstances of the time. While she and her family enjoyed freedom, they still faced discrimination and segregation.

She wrote a letter to abolitionist Frederick Douglass’ newspaper, the North Star, to criticize abolitionists who still supported segregated schools and communities and didn’t demand full equality. Her letter was printed, making it her first published work.

By age 25, Shadd Cary had established an unprecedented, progressive voice and a willingness to challenge others on what equality truly meant. Her letter in the North Star marked the start of her career as a journalist and political activist, yet was met with hostility from some groups.

The Fugitive Slave Act enacted in 1850 ordered Americans to detain freedom seekers, making it increasingly difficult for her to advocate effectively for racial equality. Shadd Cary and her family moved to Canada in hopes that she would be able to fight for African Americans’ freedom more effectively from across the border.

Once there, she published materials — including the pamphlet “Notes of Canada West” —  encouraging former slaves and free African Americans living in the North to make the journey to Canada to live their lives free of prejudice.

Through her writing, Shadd Cary harnessed the power of communication to reach people back in the U.S. She also believed in the power of education to create opportunities; while writing and lecturing from Canada on the importance of freedom, she opened an integrated school for children.

In 1853, Shadd Cary became the first black woman in North America to edit and publish a newspaper when she founded The Provincial Freeman, a publication devoted to the anti-slavery movement. She even put her own welfare on the line by bringing her paper back to the U.S. while visiting to gather information and stories for the newspaper. When the Civil War began, Shadd Cary returned to the U.S. and recruited and encouraged African Americans to join the fight against the Confederacy by joining the Union Army.

Her pioneering attitude didn’t stop there. Following the war, she moved to Washington, D.C., and graduated from Howard University in 1870 with a law degree, becoming the second black female lawyer in the United States.

Although decades would pass until women were given the right to vote, Shadd Cary was inspired by the women’s suffrage movement and continued her work to break barriers by petitioning for women’s voting rights.

Her house in D.C., declared a National Historic Landmark, serves as a reminder of her legacy and all that she sacrificed to make her voice heard while advocating for racial and gender equality.