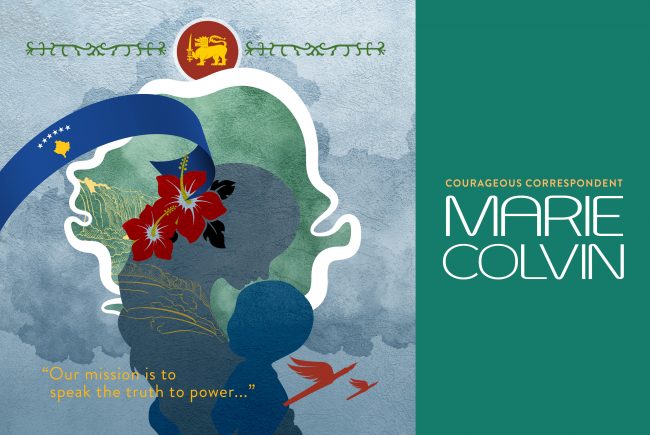 “Our mission is to speak the truth to power …” — Marie Colvin

As the COVID-19 health crisis continues to unfold, we are monitoring and following the guidelines from the World Health Organization, U.S. Centers for Disease Control and Prevention and other pertinent public health organizations. While we all examine how to deal with the threat that COVID-19 poses to our physical and mental health and learn to function under increasingly stringent quarantine circumstances, we have found it’s helpful to take breaks from the news. Although it’s difficult to think about much else right now, we hope you can enjoy learning about an inspiring communicator.

Acts of valor are typically associated with service members, but as we face the COVID-19 pandemic, we see daily acts of valor from health care workers and others on the front lines of the outbreak — including journalists. This month, we’re honored to showcase the courageous actions of war correspondent Marie Colvin.

As an American reporter writing for London-based The Sunday Times, Colvin defined herself through her words. She believed that in order to accurately and fully tell the story of individuals facing life in a country at war, it was crucial to be an eyewitness and report from the front line — even if that meant putting her safety at risk.

Her career spanned more than 30 years taking her to more than a dozen countries. Colvin was most at home when she was in the field on assignment, working to uncover injustices brought on my political unrest. She quickly earned recognition as a trailblazer for female war correspondents on the battlefield through the powerful stories she told, including in East Timor when she saved the lives of 1,500 women and children who were surrounded in a compound by Indonesian-backed forces. Colvin made the story public, which resulted in their safe evacuation four days later.

Colvin connected with those who were suffering in high-risk areas and gained their trust, committed to exposing human rights violations as well as the grim reality of war and its forgotten victims. She is a legend for her courageous efforts to call attention to the trauma that innocent individuals had to endure as part of political conflicts, from the Middle East to Chechnya.

Colvin’s deep commitment to reporting the truth resulted in what would become a trademark black patch covering her left eye after a grenade attack in Sri Lanka in 2001. Although she experienced post-traumatic stress disorder (PTSD) symptoms, nothing would stop her from pursuing her work at the center of conflict.

In 2011, Colvin was smuggled into the city of Homs, Syria, through a tunnel to report on the suffering of civilians. It was her last story.

Colvin died while trying to escape an attack by Syrian forces. Renowned for her bravery, extraordinary character and role in exposing human rights crimes, her death prompted heartfelt tributes from people around the world.