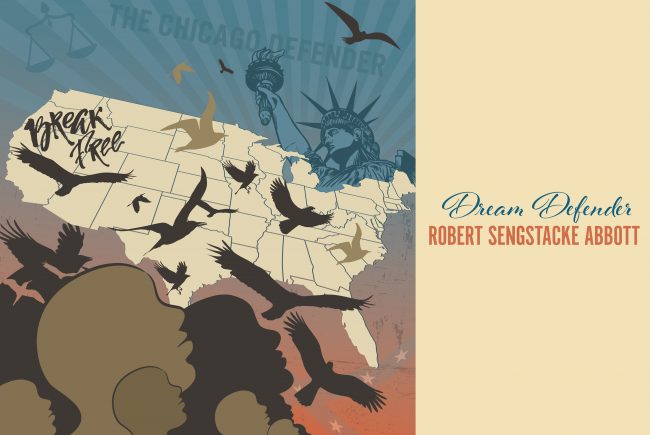 “No greater glory, no greater honor, is the lot of man departing than a feeling possessed deep in his heart that the world is a better place for his having lived.” — Robert Sengstacke Abbott

At his core, Robert Sengstacke Abbott was a defender of rights. When he was unable to practice law in the Midwest due to racial prejudice, he founded the Chicago Defender in 1905 to advocate for equality through journalism.

Abbott’s newspaper grew to have the highest circulation of any African American-owned newspaper in the country, reaching more than 200,000 readers by the early 1920s — and making Abbott one of the first African American self-made millionaires.

But Abbott’s goal was not to become wealthy. Through the articles, cartoons and even train schedules published in the Defender, he encouraged African Americans living in the economically disadvantaged, segregated South to move to Chicago for job opportunities and social equality. His writing proved to be persuasive; by 1940, 1.5 million African Americans moved from rural areas in the South to major cities in the North.

In the Defender’s articles, Abbott painted readers a life of safety and prosperity and illustrated the stories of individuals who were thriving there. Photos of Chicago were printed in the newspaper to further illustrate the life that waited for those willing to make the move, as were housing ads for readers looking to relocate.

Abbott also used his Chicago-based newspaper to expose the lynchings and other acts of violence that African Americans were experiencing in the South, which raised awareness of the unjust treatment they endured and furthered his efforts to abolish lynching at the federal level.

Today, he is remembered for his dedication to encouraging others to fight for their rights even after they had left their segregated communities behind.