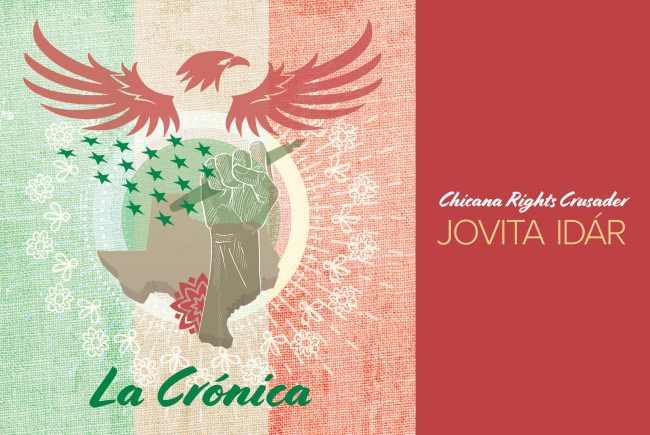 As the nation grapples with our long, painful history of racial injustice, we’re proud to highlight a Mexican-American journalist and activist who worked to dismantle the systematic racism and oppression of the Chicanx community.

Activism was a pursuit that ran in Jovita Idár’s family. She was exposed to journalism and politics at a young age through her father, Nicasio, a newspaper editor and a civil rights advocate. His work to advance equality for Mexican-Americans inspired her to take on the challenges and injustices that this community faced in Texas at the turn of the century.

Although she started her career as a teacher, Idár realized that she couldn’t make a positive impact on the lives of her students as long as they were forced to attend segregated schools that lacked the materials and supplies necessary for a proper education. She decided the most effective way she could create lasting change was through journalism.

Idár left her job as a teacher and started working for her father’s newspaper La Crónica in Laredo, which was dedicated to news and activism surrounding Mexican-American rights. There, she reported on the violence and racism her community was enduring. Her articles also supported the revolution in Mexico.

In 1911, Idár and her family organized the First Mexican Congress that brought together Mexicans to fight injustice. After the Congress, Idár’s articles in La Crónica had a new topic: advocating for women’s suffrage. That same year, she founded La Liga Femenil Mexicanista (the League of Mexican Women) to provide education for Mexican-American students.

Idár eventually moved her talents to the El Progreso newspaper, where she penned an article that condemned President Woodrow Wilson’s decision to send Unites States troops to guard the border due to growing tensions during the Mexican Revolution. This resulted in the Texas Rangers shutting down the newsroom of El Progreso — a radical action that Idár vehemently protested. Despite this challenge, Idár kept writing. She returned to La Crónica and took over its management when her father passed away in 1914.

Even after moving to San Antonio a few years later, Idár remained committed to her community through volunteering, promoting equal rights for women through the Democratic Party and becoming editor of El Heraldo Cristiano. Her lifelong pursuit to unify Mexicans of Texas around important issues such as civil rights, bilingual education and equality for all had lasting effects and helped shape future political and social movements.