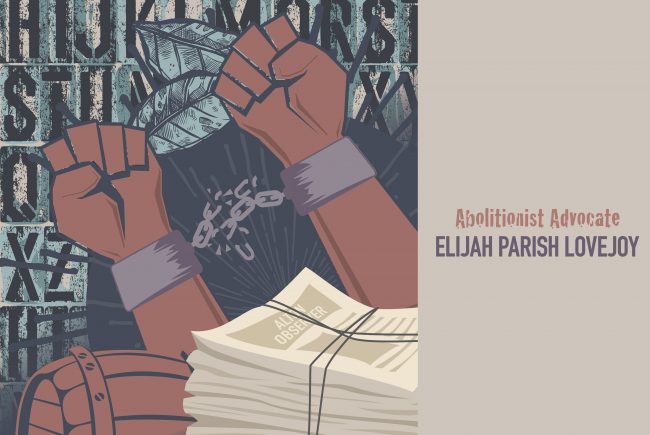 “As long as I am an American citizen, and as long as American blood runs in these veins, I shall hold myself at liberty to speak, to write, and to publish whatever I please on any subject.” — Elijah Parish Lovejoy

Elijah Parish Lovejoy was a journalist who, instead of encouraging violence against slave owners to further the abolitionist movement, used his writing to condemn slavery and persuade public opinion.

As editor of the St. Louis Observer, an antislavery newspaper, Lovejoy called out a justice system that allowed human rights violations to go unpunished.

The people of St. Louis did not share Lovejoy’s views. Although he strongly believed it was his right and responsibility to speak out against slavery, increasing threats of violence forced him to move his newspaper’s production 25 miles away to Alton, Illinois. A pro-slavery mob followed him there and destroyed his printing press.

Despite Illinois being a free state, many of its residents still supported slavery. Lovejoy’s newspaper — renamed the Alton Observer — quickly caught the attention of locals and became a target. His staunch activism and dedication to defending the rights of African Americans resulted in his printing press being destroyed two more times.

On November 7, 1837, as he waited for his fourth press to be delivered, he and a group of his supporters armed themselves and confronted a mob that intended to stop his publication once again.

At only 34, Lovejoy was shot and killed while attempting to save his printing press and the words that carried hope and inspiration to thousands. This tragedy only strengthened the abolitionist movement; activists across the country were furious, denouncing his death and inspiring others to join the fight for freedom. Today, he is remembered for his integrity and courage as a member of the press.