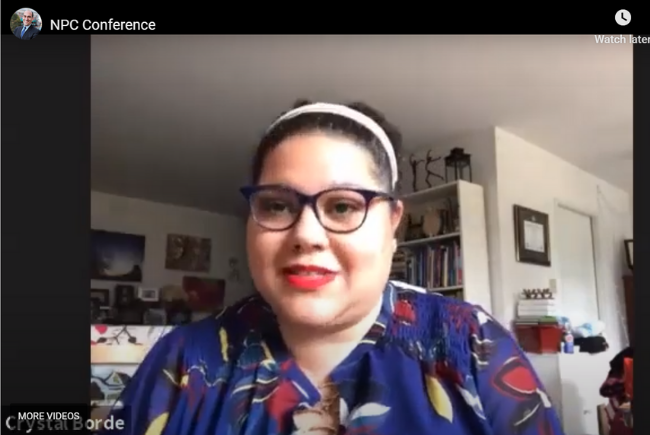 On August, 4, 2020, the National Press Club held the first of a series of “Candid Conversations” for journalists and communicators. This event focused on discussing the ways communications professionals can help organizations address and navigate conversations about race and racism. Vanguard’s Crystal Borde, vice president and Diversity + Inclusion practice lead, was among the featured panelists who shared best practices and insights.

A virtual panel of top communicators offered practical suggestions Tuesday for organizations that want to talk about or respond to difficult issues of systemic racism and racial injustice and inequality following the killing of George Floyd by Minneapolis police in May.

Consumers hold companies accountable for their corporate behavior and they expect corporate leaders to speak out on social justice issues, Clark said.

Clark, who recounted her own childhood experiences of racism, called Floyd’s killing a “humanity moment” that people — regardless of race — could not ignore.

“It was a moment in a movement,” Borde said. Floyd’s death, she noted, is one of many such instances, and communicators should prepare for issues of racism to arise again. She advised communicators to issue public statements that are authentic, transparent and align with the company’s or organization’s mission.

Greenwood said it’s in Ben & Jerry’s DNA to run toward confrontation and take a stand on issues, which is why the company could issue a strong public statement following Floyd’s death. But he acknowledged not all companies can ― or should — take that approach.

“Do something that’s authentic to you,” he said. “It can be something small and reasonable.”

“You don’t have to be perfect,” he said. “But you have to do the work, both internally and externally.”

Companies should be thoughtful, not reactive, Borde said. “Listen to the conversations taking place before you start talking,” she said.

All the panelists agreed that organizations must do more than issue statements. “You need to go beyond the sound bite of Black Lives Matter,” Clarke said. “You have to be able to back it up publicly.”

To ensure the candid conversations about race and racism continue and don’t fade away, Borde said communicators should create a plan with milestones and commit to achieving them.

The corporate world must recognize that the marketplace has changed, Clarke said.

“It’s no longer business as usual,” Clarke said. “Diversity and inclusion have never been a necessity [in business]. Now everyone has the spotlight on them.”