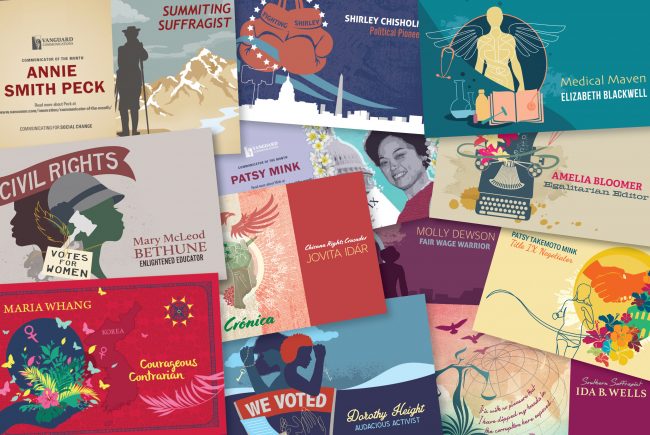 Through the years, we’ve recognized several women as Communicators of the Month who fought for women’s equality.

Last week, we celebrated the 100th anniversary of the ratification of the 19th Amendment, which gave women the right to vote. This week, in recognition of Women’s Equality Day, we honor the advocates who fought for the equal rights, inclusion and representation of all women in our communities, government and workplaces. There is still much to fight for — including ensuring that the Equal Rights Amendment is ratified in all states — and we stand with the women advocates and their allies leading the fight for that and other issues in the next 100 years.

Here are some of the remarkable women equality advocates we have featured in our calendar over the years (listed in alphabetical order).

Remembered as the “First Lady of Struggle,” Mary McLeod Bethune organized conferences, wrote for national African American newspapers and served on advisory boards to work toward a more inclusive future. Her legacy lives on today as an educational and political pioneer, thanks to her tireless efforts advocating for African Americans to receive equal opportunities in school and society. Learn more about Mary McLeod Bethune’s career as an advocate for racial and gender equity.

Elizabeth Blackwell’s dedication to social activism began with her father, a strong supporter of women’s rights who ensured that his daughters received the same educational opportunities as his sons. Blackwell set her sights on medicine and became the first woman in the United States to earn a medical degree. Throughout her career, she defied generally accepted gender roles and fought for equal opportunities for women, inspiring change and increasing awareness about the importance of an inclusive society. Learn more about how Elizabeth Blackwell championed equal education opportunities for women.

Although she was well-known for supporting gender equality with her adoption of less restrictive clothing styles for women — including pantaloons, now known as “bloomers,” due to her influence — Amelia Bloomer’s involvement in social activism did not stop there. Bloomer used her communications skills to change the way women thought about themselves and encouraged them to fight for equality in issues well beyond clothing choices, including financial matters, education opportunities and politics. Learn more about Amelia Bloomer’s lifelong commitment to women’s rights.

In 1968, Shirley Chisholm won a seat in the U.S. House of Representatives, becoming the first African American woman to serve in Congress. During her seven terms, she earned the nickname “Fighting Shirley” by advocating for dozens of pieces of legislation that promoted racial and gender equality and helped individuals facing financial difficulties. Her biggest legacy is assisting in the establishment of the Congressional Black Caucus. Learn more about Shirley Chisholm’s impact on women of color in politics.

A dedicated activist within the Democratic Party and the suffrage movement, Molly Dewson advocated for the causes close to her heart. Whether she was lobbying to establish fair wages and working conditions or encouraging women’s involvement in politics, Dewson’s work helped inspire and inform women about their rights and opportunities. Learn more about Molly Dewson’s involvement in the suffrage movement.

Called the “godmother of the civil rights movement” by President Barack Obama after her death, Dorothy Height was a courageous and outspoken influencer. She paved the way in focusing on women’s rights while also considering the rights of the African American community, dedicating herself to helping to create a more inclusive country by expanding opportunities for Black women in politics. Learn more about Dorothy Height’s successful career as a civil rights leader and community organizer.

Jovita Idár was a Mexican American journalist and activist who worked to dismantle the systematic racism and oppression of the Chicanx community. She decided the most effective way she could create lasting change was through journalism, where she reported on the violence and racism her community was enduring. As time went on, Idár’s articles took on a new topic: advocating for women’s suffrage. Learn more about Idár’s impact and commitment to her community.

Patsy Takemoto Mink may not have been a professional athlete, but her effect on U.S. athletics is among the most profound. As the principal author of Title IX, her work is largely responsible for the exponential growth of women’s athletics — both amateur and professional. Enacted in 1972, Title IX protects people from discrimination based on gender in education programs or activities receiving federal funds. This opened significant opportunities for women in education, as well as sports. Learn more about how Patsy Mink championed the equal rights of women, immigrants and children.

Born in Providence, Rhode Island, in 1850, Annie Smith Peck took up the sport of mountain climbing at age 44. She became the third woman ever to scale the Matterhorn in the Swiss Alps — and the first to make the climb in pants instead of a skirt. A dedicated supporter of women’s suffrage, she hung a “Votes for Women” banner on her summit of Mount Coropuna, Peru, in 1909. Learn more about the impact of Annie Smith Peck’s work on the women’s suffrage movement.

Ida B. Wells believed in the power of reporting the truth to effect change and positively impact people’s lives. Wells was an active fighter for women’s suffrage, particularly for Black women. She was a founder of the National Association of Colored Women’s Club, which was created to address issues dealing with civil rights and women’s suffrage, as well as the Alpha Suffrage Club in Chicago. Her work with the latter organization played a crucial role in the fight for women’s equality in Illinois. Learn more about how Ida B. Wells battled against sexism, racism and violence throughout her lifetime.

Maria Whang was determined to create a more equitable life for herself, even if that meant leaving her home in Korea. She dreamed of changing society’s expectations of women and embracing her creativity. Around 1905 Whang and her children immigrated to Hawaii, where she worked three jobs and became a community organizer who founded the Korean Women’s Association Hawaii chapter in 1913. Her tenacity in pursuing a society in which women are valued and respected remains an inspiration to women today. Learn more about how Maria Whang helped other women find their voices.