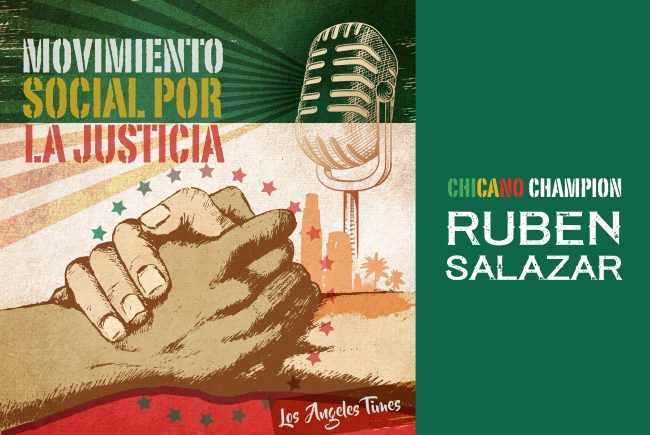 “Chicano meant looking at oneself through one’s ‘own’ eyes and not through Anglo bifocals.” — Ruben Salazar

One of the earliest journalists of color ever published in the Los Angeles Times, Mexican American journalist Ruben Salazar became a legend at the newspaper through his trailblazing reporting on the Chicano civil rights movement.

In his first years at the LA Times, he was a foreign correspondent, covering the 1965 United States occupation of the Dominican Republic as well as the Vietnam War. While serving as the LA Times’ bureau chief in Mexico City, he also reported on the Tlatelolco massacre.

After returning to the U.S. in 1968, Salazar focused his work on the Mexican American community and became one of the most prominent figures within the Chicano movement. Many of his articles criticized the Los Angeles government’s treatment of Mexican Americans, including the low quality of education, high unemployment and restricted housing conditions — especially among individuals residing in East LA where news coverage had previously focused mainly on criminal activity.

He was dedicated and outspoken, and his work amplified issues the Mexican American community faced. An active participant in the civil rights battles, Salazar forged relationships with members of the Chicano movement and through his articles gave a voice to the inequalities his community endured.

Being on the front lines of social change ultimately cost him his life. Salazar was struck and killed by a tear-gas canister fired by the Los Angeles police while he was covering the National Chicano Moratorium March to protest the Vietnam War on August 29, 1970.

Although his death was ruled an accident, and reconfirmed as unintentional after an official review by the Los Angeles County Sheriff’s Department in 2011, doubts and uncertainty still linger decades later. Today, he is memorialized in the Globe Lobby of the old LA Times building as one of four LA Times journalists killed while reporting for the newspaper.