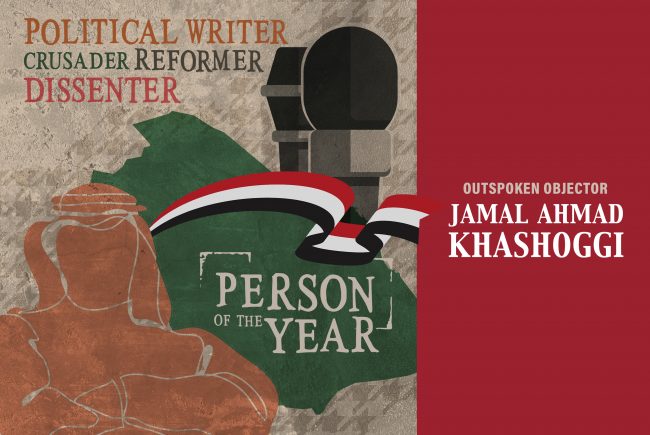 “I have left my home, my family and my job, and I am raising my voice … I want you to know that Saudi Arabia has not always been as it is now. We Saudis deserve better.” — Jamal Ahmad Khashoggi

A respected Saudi journalist, Jamal Ahmad Khashoggi covered major stories out of the Middle East, such as news on the late al-Qaeda leader Osama Bin Laden and the Soviet invasion of Afghanistan. In his decades reporting on political matters, he also served as an adviser to the Saudi government.

However, he fell out of favor with the Saudi royal family and fled to the U.S. in 2017 after writing columns that criticized the policies of crown prince Mohammed bin Salman, Saudi Arabia’s de facto ruler. Khashoggi worried he would be arrested due to the prince’s efforts to eradicate dissent.

After settling near Washington, D.C., his first column for The Washington Post was published in September 2017. Khashoggi went on to write many more columns that spoke out against acts of tyranny and oppression in the Middle East — such as unjust reform plans and the mistreatment and arrests of clerics, academics and human rights activists — before his murder by Saudi agents inside the Saudi Consulate in Istanbul in 2018.

In the months leading up to his death, Khashoggi was working to create an organization in D.C. to promote democracy amongst Arab countries called Democracy for the Arab World Now (DAWN).

Today, nearly two years after his death, his friends and colleagues are launching DAWN to carry on his legacy. The organization calls out human rights violations and publishes articles by political exiles from across the Middle East.

Khashoggi was named TIME Magazine’s Person of the Year in 2018. Although his courageous voice as a journalist was silenced, he has become a symbol of freedom of speech around the world.