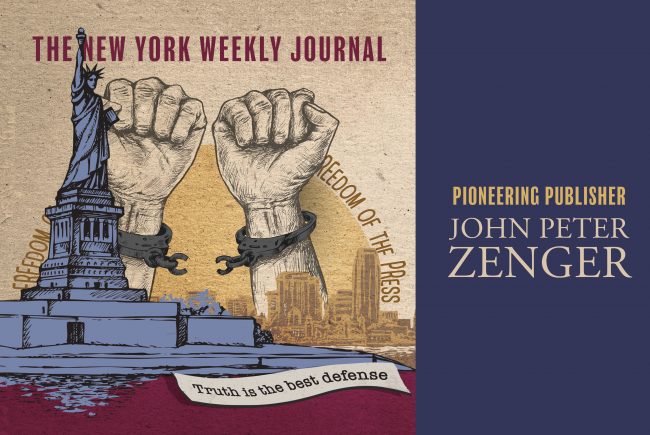 “The loss of liberty in general would soon follow the suppression of the liberty of the press; for it is an essential branch of liberty, so perhaps it is the best preservative of the whole.” — John Peter Zenger

A free and independent press is a key aspect of a healthy democracy, but it hasn’t always been a guarantee. New York publisher John Peter Zenger’s libel trial served as a crucial step forward in the fight for freedom of the press among American colonists in the 1700s.

After emigrating to New York City from Germany at age 13, Zenger worked for eight years as an apprentice to a printer. In 1726, he established his own printing business.

Zenger printed the first issue of the province’s first independent newspaper, the New York Weekly Journal, on November 5, 1733. The publication featured articles that opposed colonial governor William Cosby’s policies, which accused him of a variety of crimes and civil rights violations.

As the newspaper’s publisher, Zenger was legally responsible for its content. The editors of the Weekly Journal continued to criticize Cosby’s tyrannical administration until Zenger was arrested for libel a year after the first issue was published. After waiting in prison for 10 months for his trial, his defense attorney demanded that the prosecution prove the newspaper’s stories contained false information. They acquitted Zenger, saying that his charges were based on facts.

Although freedom of the press was not instated until decades later with the First Amendment, Zenger’s suit established an important victory for newspaper publishers of his time and today remains a symbol of a strong democracy.