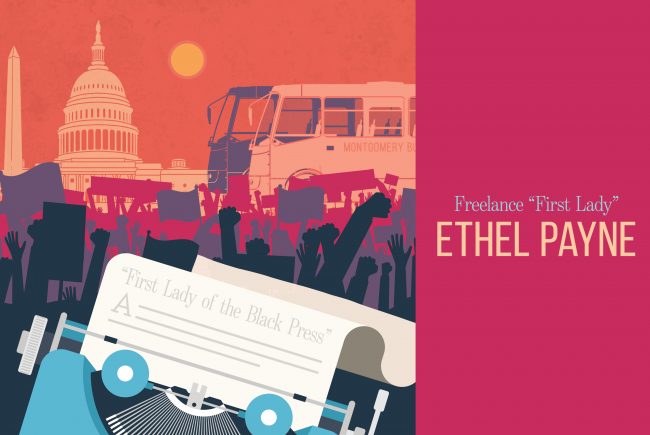 “I stick to my firm, unshakeable belief that the black press is an advocacy press, and that I, as a part of that press, can’t afford the luxury of being unbiased … when it comes to issues that really affect my people, and I plead guilty, because I think that I am an instrument of change.” — Ethel Payne

Known as the First Lady of the Black Press, Ethel Payne was a fearless journalist and dedicated civil rights activist who didn’t shy away from topics that other reporters were hesitant to cover.

When the Korean War began in 1950, Payne was there, capturing the stories of African American troops who were being mistreated, segregated and subjected to racial slurs. A year later, after submitting freelance articles for publication, Payne was hired as a reporter for the Chicago Defender, one of the nation’s leading African American newspapers.

In her new position, Payne quickly earned a reputation for shedding light on difficult subjects. Her job led her to Washington, D.C., to cover some of the United States’ most monumental moments, such as the Army-McCarthy trials, the civil rights movement, and Brown v. Board of Education.

As the first African American woman to join the White House Press corps, Payne repeatedly confronted President Eisenhower about his policies on immigration, segregation and discrimination throughout the United States. This eventually led to a heated exchange with the president, but Payne did not back down — even after experiencing backlash for her unrelenting efforts to bring awareness to the civil rights movement. She went on to report about Rosa Parks and the Montgomery Bus Boycott and interview Martin Luther King Jr.

Payne broke another barrier when she became the first African American woman to appear on a national network as a radio and television commentator for CBS in the 1970s. Years later, after retiring from journalism, she continued writing and advocating for the release of Nelson Mandela from prison in South Africa.

Today, Payne is remembered for her straightforward, honest style of writing, as well as her courage to ask the tough questions.