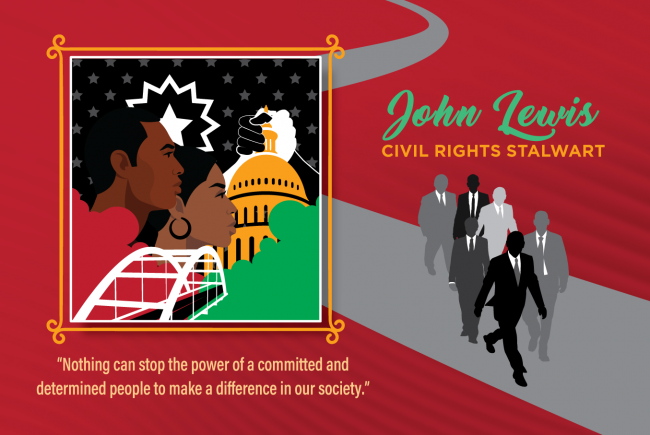 “Do not get lost in a sea of despair. Be hopeful, be optimistic. Our struggle is not the struggle of a day, a week, a month, or a year, it is the struggle of a lifetime. Never, ever be afraid to make some noise and get in good trouble, necessary trouble.” — John Lewis

Throughout his life, former Rep. John Robert Lewis exemplified the power of the peaceful protest, or what he called “getting in good trouble.” His determination to stand up to racial injustice would get him beaten, arrested more than 45 times, elected to Congress, and awarded the Presidential Medal of Freedom.

In 1960, while a student at Fisk University in Nashville, Tennessee, Lewis and other student demonstrators organized sit-in protests to desegregate the city’s downtown lunch counters. Three months after the sit-ins began, Nashville became the first major Southern city to begin desegregating public facilities.

Lewis also was among the original 13 Freedom Riders, student activists who challenged segregation at Southern bus terminals in 1961. On one of these rides, Lewis was beaten and left unconscious for trying to enter a “whites only” bus terminal waiting room in Rock Hill, South Carolina. Later that year, the Interstate Commerce Commission enforced stricter guidelines banning segregation in interstate travel.

While president of the Student Nonviolent Coordinating Committee (SNCC), Lewis became the youngest of the civil rights movement’s “Big Six” — a formidable group of prominent civil rights group leaders that also included A. Philip Randolph, Roy Wilkins, James Farmer Jr., Whitney Young Jr., and Martin Luther King Jr. Together, they arranged the historic March on Washington in August 1963, where the 23-year-old Lewis served as one of the keynote speakers.

Lewis may be best known, however, for leading the first of three Selma to Montgomery marches, which sought to bring attention to the lack of voting rights for Black people in Alabama and nationwide. On March 7, 1965 — which would become known as Bloody Sunday — the marchers were met by state troopers and police on the Edmund Pettus Bridge in Selma. When the marchers did not disperse, they were attacked with clubs, whips and tear gas. Lewis’ efforts at Selma would gain him not only a fractured skull, but also the hope of the Voting Rights Act of 1965, which President Johnson would sign later that year.

Lewis would continue his activism as a member of Congress, serving in the U.S. House of Representatives for Georgia’s 5th congressional district from 1987 until his death in 2020. Neither his protests nor his arrests came to an end once Lewis was elected to Congress. In his time as a congressman, Lewis would be arrested five times for protesting apartheid and genocide, as well as supporting comprehensive immigration reform. In the last years of his life, Lewis devoted much of his time to the Voting Rights Advancement Act, which, if enacted, would guarantee the right to vote for every U.S. citizen.

While battling stage 4 pancreatic cancer, Lewis witnessed the protests in the wake of George Floyd’s killing on May 25, 2020. Discussing these protests, Lewis remarked that: “It gives me hope that as a nation and as a people, we’re going to get there. We’re going to make it. We’re going to survive, and there will be no turning back.”