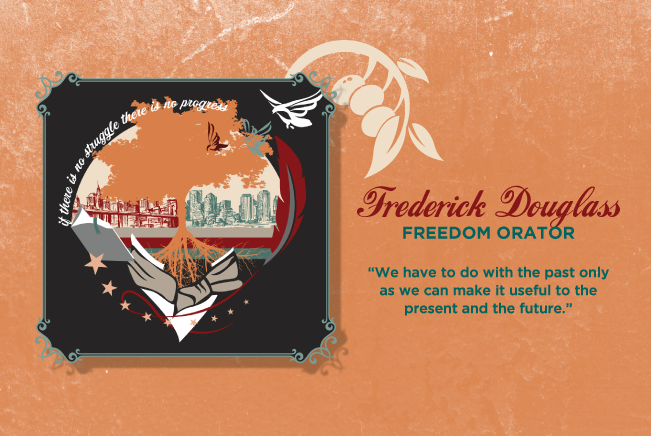 “In a composite nation like ours, as before the law, there should be no rich, no poor, no high, no low, no white, no black, but common country, common citizenship, equal rights and a common destiny.” ― Frederick Douglass

Born in a Maryland cabin as Frederick Augustus Washington Bailey, Frederick Douglass would spend his life seeking and defending freedom for himself and others.

From a young age, Douglass understood the value of the spoken and written word and its association with freedom. When he was eight years old, Douglass learned the alphabet from Sophia Auld, the wife of Baltimore enslaver Hugh Auld. These lessons were discovered and forbidden by Hugh Auld, in keeping with the growing belief that “an educated enslaved person was a dangerous person.” However, Douglass continued to further his education by buying his own schoolbooks and exchanging food for reading and writing lessons from local white children.

At 16 years old, Douglass was enslaved to Edward Covey, a “slavebreaker” who daily whipped and barely fed him. Douglass would later write about Covey’s abuse — and his eventual defiance of it — in his autobiography. On another plantation in Talbot County, Maryland, Douglass started a secret Sunday school, where he taught other enslaved individuals how to read.

When he was 18 years old, Douglass resolved to escape slavery once and for all. Douglass’ first escape plan was discovered, and he was jailed for it. In 1838, Douglass made his successful escape from a Baltimore shipyard by impersonating a sailor. He eventually settled in New Bedford, Massachusetts, where he managed to avoid recapture under the new name of Frederick Douglass.

At an antislavery convention in 1841, Douglass was invited to describe his experiences under slavery. His extemporaneous remarks led to a lecturer position within the Massachusetts Anti-Slavery Society — and the beginning of Douglass’ legacy as one of the greatest orators of all time. In fact, his motivation for writing the classic 1845 autobiography, “Narrative of the Life of Frederick Douglass, an American Slave, Written by Himself,” was to counter skeptics who doubted the eloquent spokesman’s upbringing as an enslaved person. Following the book’s publication, Douglass would meet other key leaders of the day, including women’s suffrage icon Susan B. Anthony. Douglass would later become a staunch advocate of women’s rights.

His autobiography was so successful that Douglass fled to Great Britain and Ireland to avoid recapture by his former enslaver. While abroad, Douglass gained support for the American abolition movement and raised money to purchase his freedom. Douglas returned a free man and started a newspaper called the North Star. In addition to covering abolitionist issues, the paper addressed education for African Americans and equality for women.

Douglass was not afraid to share his views on Lincoln’s mixed legacy around slavery. At the 1876 unveiling of the Emancipation Memorial in Washington, D.C., Douglass acknowledged the former president’s strides for African Americans while also addressing his ambivalence around the issue of slavery. The memorial, which depicts a freed slave kneeling at Lincoln’s feet, recently came under attack by protesters following the killing of George Floyd in May 2020.

Douglass moved to Washington, D.C., in 1872 and lived there for the remainder of his life. In 1877, he was appointed U.S. marshal of the District of Columbia by President Rutherford B. Hayes. The following year, he bought Cedar Hill, his Anacostia home that is now a National Historic Site.