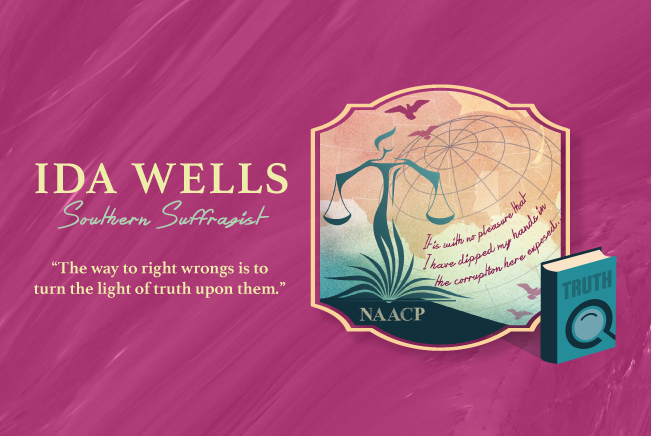 “Somebody must show that the Afro-American race is more sinned against than sinning, and it seems to have fallen upon me to do so.” — Ida B. Wells

Ida Bell Wells was born to an enslaved mother in Holly Springs, Mississippi, during the Civil War. About six months after her birth, the Emancipation Proclamation was issued, and the Wells family was decreed free. Like so many African Americans living in the Reconstruction Era South, however, Wells and her family would still face significant discrimination for the rest of their lives.

Wells grew up witnessing the political activism of her parents. Her father, James, was involved with the Freedman’s Aid Society, established to increase education opportunities for newly freed enslaved people in the South. He also helped start Shaw University (now Rust College), a school in Holly Springs for newly freed enslaved people, where his eldest daughter Ida would eventually enroll.

When Wells was only 16 years old, yellow fever killed her parents and her infant brother. To keep her remaining brothers and sister together, she began working as a teacher, eventually moving the family to Memphis, Tennessee.

It was in Memphis in 1884 that Wells was ordered to leave the women’s car of a train and move to the smoking car — an action that she claimed violated the Civil Rights Act of 1875. (A year prior, a Supreme Court ruling had declared the Civil Rights Act of 1875 unconstitutional. Vanguard’s February Communicator of the Month, Frederick Douglass, spoke out against this decision at a Civil Rights Mass-Meeting in Washington, DC. Despite the best efforts of Douglass and other critics of the ruling, it would be another 80 years before Congress would again guarantee civil rights to racial minorities through the 1964 Civil Rights Act.)

Although Wells sued the railroad company and won, her case was later appealed and reversed. The lawsuit results ignited her passion for shining a light on the unjust treatment that African Americans faced — or, in her words, to “turn the light of truth upon [wrongs].” To help her shine this light, she looked to the Free Speech and Headlight, a local Black newspaper in Memphis. At 25, Wells became co-owner and editor of the paper, which quickly gained a reputation as “the most radical and talked about newspaper in Memphis.”

In 1892, a lynch mob murdered Wells’ friend Thomas Moss, an African American grocery store owner, and two of his workers, also African American. Following the murders, Wells began investigating and uncovering other cases of white mob violence. Her efforts to expose racial inequalities helped launch an anti-lynching movement in the 1890s. In response, locals burned down the newspaper’s offices and drove Wells from Memphis all the way to Chicago.

While Wells left the South and would not return for another 30 years, she didn’t leave her work behind. Just one month after the newspaper’s destruction, Wells penned her famous pamphlet, “Southern Horrors: Lynch Law in All Its Phases.” The 1892 pamphlet — and its in-depth sequel published three years later — outlines and condemns lynchings of African Americans by Southern whites.

Wells’ determination to counter these injustices in the face of danger was remarkable, especially as an African American woman living in the Jim Crow segregation era. At the time, the mainstream media negatively portrayed African Americans and often fostered an irrational fear of Black men. Wells researched and reported hundreds of lynchings, collecting both eyewitness accounts and statistics to tell the truth behind the incidents. Through her writings, she revealed that white mobs often killed Black men for having consensual sex with white women — not, as they claimed, on the basis of rape. By contrast, white men committed sexual violence against Black women with impunity.

In Chicago, Wells continued her career as a civil rights journalist, activist and lecturer. She became a co-founder of the National Association for the Advancement of Colored People (NAACP) in 1909 and worked closely with Susan B. Anthony in the women’s suffrage movement.

Throughout her life, Wells worked tirelessly to expose discrimination and violence toward African Americans in the South. Wells would die before she could finish her autobiography, “Crusade for Justice,” but her daughter, Alfreda Barnett Duster, edited and published the manuscript in 1970. Last year, the University of Chicago Press released a second edition featuring an afterword by Wells’ great-granddaughter, Michelle Duster. Also in 2020, the Pulitzer Prize Board posthumously awarded Wells a 2020 Special Citations and Awards Pulitzer Prize “for her outstanding and courageous reporting on the horrific and vicious violence against African Americans during the era of lynching.”