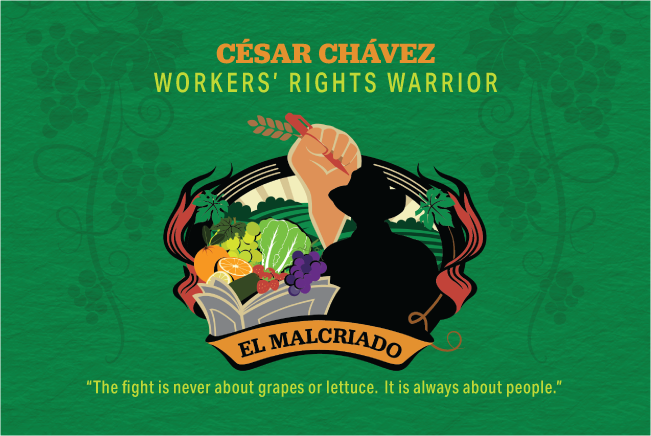 César Estrada Chávez had a passion for fairness and equality that ignited a national movement to organize farmworkers and restore their dignity.

Chávez was born to Mexican immigrants in Yuma, Arizona. His family moved to California, where they worked as migrant farmworkers from the Imperial Valley up to Fresno County. He and his brother would end up attending 37 schools.

Added to the frequent disruption in Chávez’s education were the challenges of language and racism. At school, Spanish — which Chávez spoke exclusively at home — was forbidden and violators punished. Many schools were still segregated.

Chávez graduated from the eighth grade at the age of 15. With his father injured from an accident, Chávez had to support his family rather than pursue further education, even though he displayed an avid interest in learning throughout his life. In the fields and migrant camps, Chávez experienced inhumane living conditions, unsafe working conditions, corrupt labor contractors and grossly insufficient wages for the grueling work of farm labor ― challenges that drove his commitment to labor rights for farmworkers.

After serving in the then-segregated U.S. Navy from 1946 to 1948, Chávez married, started a family and grew interested in labor organizing. In the 1950s, he met activist Catholic priest Father Donald McDonnell, with whom he discussed nonviolent organizing — strikes, boycotts, marches and fasts. He studied St. Francis’ and Gandhi’s works, followed Martin Luther King Jr.’s Montgomery bus boycott, and met Fred Ross, co-founder of the Community Service Organization (CSO). Chávez became an organizer and eventually national director for the CSO, which focused on California Latino civil rights.

In 1962, Chávez resigned from the CSO to create a union for farmworkers. He co-founded the National Farm Workers Association (predecessor of the United Farm Workers, or UFW) with Dolores Huerta, another CSO member and Chicano civil rights leader. The organization’s first major test came in 1965, when its members voted to join the Filipino American grape workers’ strike against poor pay and working conditions in Delano, California. That year, the National Farm Workers Association and the Agricultural Workers Organizing Committee (which would later merge to form the UFW) united 5,000 grape workers in a 5-year-long nonviolent strike against Delano grape growers. The strike involved a 340-mile march from Delano to the state capital of Sacramento, nationwide boycotts of California table grapes and Chávez’s own hunger strike. These efforts paid off in 1970, when 26 Delano growers formally signed union contracts recognizing the UFW.

In 1965, Chávez founded El Malcriado, a newspaper to be the “voice of the farmworker.” El Malcriado would eventually become the official paper of the UFW.

Chavez’s work and that of the UFW succeeded where countless efforts in the previous century had failed: improving pay and working conditions for farm laborers in the 1960s and 1970s, and paving the way for landmark legislation in 1975 that codified and guaranteed agricultural workers’ right to unionize, bargain collectively with their employers and vote in secret-ballot elections in California.

Despite its early successes, the UFW would face plenty of pushback from growers and government in the years to come. Chávez spent the rest of his life defending farmworkers’ dignity and fighting for their rights.

Since his death in 1993 at the age of 66, Chávez has been honored posthumously with the Medal of Freedom from President Bill Clinton, a national monument, a postage stamp and most recently a U.S. federal commemorative holiday, proclaimed by President Barack Obama. César Chávez Day, celebrated on March 31 every year, is meant to honor the birth and legacy of Chávez.

“He was for his own people a Moses figure,” Clinton said. “The farmworkers who labored in the fields and yearned for respect and self-sufficiency pinned their hopes on this remarkable man, who, with faith and discipline, with soft-spoken humility and amazing inner strength, led a very courageous life. And in so doing, brought dignity to the lives of so many others, and provided for us inspiration for the rest of our nation’s history.”