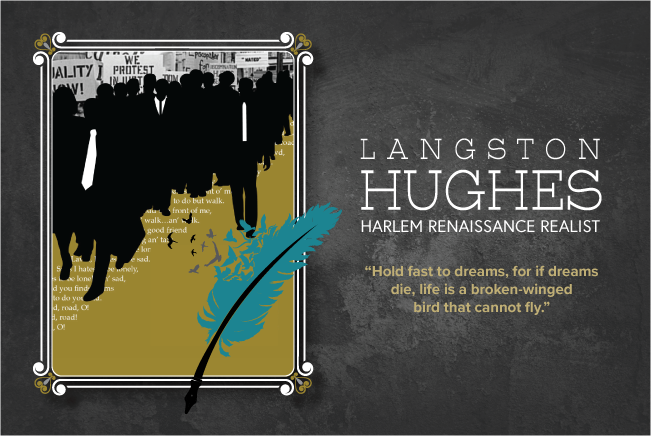 “I dream a world where man
No other man will scorn,
Where love will bless the earth
And peace its paths adorn
I dream a world where all
Will know sweet freedom’s way,
Where greed no longer saps the soul
Nor avarice blights our day.
A world I dream where black or white,
Whatever race you be,
Will share the bounties of the earth
And every man is free,
Where wretchedness will hang its head
And joy, like a pearl,
Attends the needs of all mankind-
Of such I dream, my world!”

— Langston Hughes, “I Dream a World”

James Mercer Langston Hughes has been labeled the “first Black writer in America to earn his living from writing.” Hughes insisted on using his poetry and other works to illuminate the realities of his experience, rather than trying to appeal to a white audience. This made him a literary champion of racial equality.

Hughes spent much of his childhood with his grandmother, who would speak to Hughes of her first husband, a freedman who fought alongside abolitionist John Brown in 1859 at Harper’s Ferry. He was introduced to poetry in school in Illinois, as he once recalled in his trademark blend of insight and wit:

“I was a victim of a stereotype. There were only two of us Negro kids in the whole class and our English teacher was always stressing the importance of rhythm in poetry. Well, everyone knows — except us — that all Negroes have rhythm, so they elected me class poet. I felt I couldn’t let my white classmates down, and I’ve been writing poetry ever since.”

Hughes’ first poem, “The Negro Speaks of Rivers,” was published when he was only 18 years old by “The Crisis,” the magazine of the NAACP. Hughes then attended Columbia University from 1921 to 1922, where he was the first African American to live in one of the university’s dormitories. After leaving the university, Hughes traveled to Africa and Europe and worked as an assistant cook, launderer and busboy before returning to the U.S. (In the 1960s, the U.S. State Department would name Hughes a cultural emissary to Europe and Africa.)

While in New York City, Hughes became a leading figure of the Harlem Renaissance, a period of artistic expression in the 1920s and ’30s that celebrated African American literature, music, theater and art. The movement took place against the backdrop of racial violence. In 1921, Tulsa’s thriving African American business community, or “Black Wall Street,” was destroyed when a racist white mob killed hundreds of African American residents. This decade also would see the growth of the second Ku Klux Klan.

Despite this undercurrent of racial violence, Hughes chose to celebrate his racial identity throughout his writings. For him, becoming an equal in not only his works but in society as well was essential in terms of understanding identity and obtaining respect. Therefore, he did not shy away from discussing racism — including his own experiences of racism — as well as the mundanities of life for working-class African Americans. This insistence on transparency would earn Hughes censure from white and African American critics alike. In response, Hughes would write:

“We younger Negro artists who create now intend to express our individual dark-skinned selves without fear or shame. If white people are pleased we are glad. If they are not, it doesn’t matter. We know we are beautiful. And ugly too.”

Along with other reforms he saw come to fruition in the 1960s, Hughes was alive to see Martin Luther King Jr.’s 1963 “I Have a Dream” speech during the March on Washington. King’s iconic speech evoked images of freedom — whether “Black or white” — that echo Hughes’ “I Dream a World” (above).

Hughes died in 1967 in New York from complications due to prostate cancer.