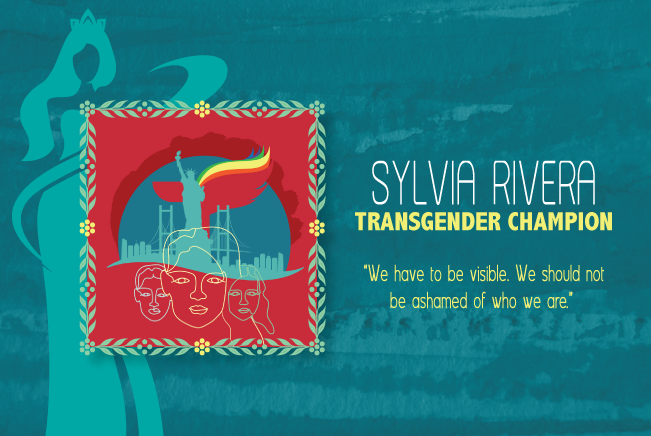 “We have to be visible. We should not be ashamed of who we are. We have to show the world that we’re numerous. There are many of us out there.”          — Sylvia Rivera

Sylvia Rivera was born Ray Rivera to a Puerto Rican father and a Venezuelan mother in 1951. Rivera had a difficult childhood, having been abandoned by her father soon after her birth and orphaned as a young child when her mother died by suicide. While being raised by her grandmother, Rivera experienced rejection and beating for her feminine characteristics.

At the age of 10, she ran away from her home in the Bronx and became a child prostitute living on the streets of Manhattan. In the 1960s, 42nd Street was home to drag queens, sex workers and other members of the gay community. A group of drag queens took Rivera in. With their support, Rivera became “Sylvia.”

Rivera soon became one of America’s first advocates for transgender and gender-nonconforming individuals who didn’t have a voice within the mainstream gay community at the time. The gay rights movement considered Rivera radical for having a fluid gender identity. This only incentivized Rivera to advocate for the civil rights, equality and inclusion of people marginalized by society, including those who were homeless and from racially diverse groups.

In 1969, police conducted a violent raid at the Stonewall Inn, a gay bar and place of refuge in New York City’s Greenwich Village. The raid resulted in nearly a week of rioting, during which the LGBTQ community protested law enforcement’s brutal and discriminatory treatment of the bar’s patrons and employees. At the bar with her friend and African American transgender activist Marsha P. Johnson, the then 17-year-old Rivera reportedly shouted “I’m not missing a moment of this – it’s the revolution!” (Listen to Rivera discuss the Stonewall Riots in this archived interview with author and podcast host Eric Marcus.)

After the riots, Johnson encouraged Rivera to attend meetings of the Gay Liberation Front (GLF) and Gay Activists Alliance (GAA). Rivera felt excluded by the members of these organizations, however, as their agendas often differed from hers. Instead, Rivera and Johnson created Street Transvestite Action Revolutionaries (STAR), an activist organization, as well as a shelter called STAR House. These efforts focused on helping homeless drag queens and transgender youth of color who earned money as sex workers.

Three years later, Rivera spoke at a rally in New York City’s Washington Square Park. She was stopped, however, by a radical lesbian feminist and GAA member who incited physical violence and accused her of mocking women. Despite the interruption, Rivera gave an impassioned speech highlighting the effects of white privilege in the gay rights movement. This privilege, she argued, often excluded transgender and gender-nonconforming people, as well as gay individuals who were homeless, poor or from underrepresented communities.

Rivera disappeared from the activist community for two decades following the 1973 rally, and STAR House closed down. As Rivera explained, the mainstream gay movement “had put me on the shelf.” She rejoined the movement in 1993, hoping to spark change in a more accepting society. In 1997, Rivera moved into Transy House, an informal shelter for unhoused trans women, where she lived until her death in 2002.

Often seen as someone who put the “T” in LGBTQ, Rivera’s legacy lives on today. In her final years, Rivera worked as food pantry director for the Metropolitan Community Church of New York (MCCNY). On her deathbed, she reportedly asked MCC’s Rev. Bumgardner to open an LGBTQ emergency youth shelter in the church’s basement. Thus, the Sylvia Rivera Food Pantry and Sylvia’s Place, a homeless shelter for LGBTQ youth, were born.