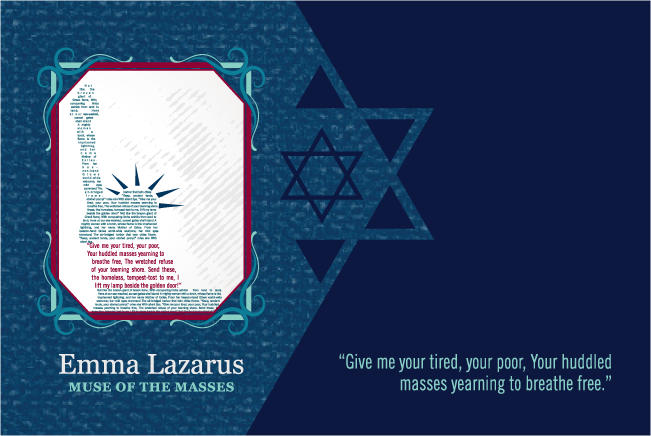 “Give me your tired, your poor,

Emma Lazarus was born in New York City in 1849 to a Jewish American family that traced its lineage back to early settlers from Portugal. Lazarus used her writing to combat anti-Semitism, eventually becoming one of the first authors to embrace and share her Jewish American heritage. However, her most famous piece of writing transcends any one racial or ethnic group, welcoming any and all immigrants to America’s shores.

Lazarus grew up in a wealthy household and enjoyed a classical education owing to her father’s success as a sugar merchant. Her father recognized Lazarus’ poetic talents early on, and he published his daughter’s first book of poems and translations when she was only 17. Lazarus sent a copy of the book to Ralph Waldo Emerson, a famous essayist, poet and leader of the transcendentalist movement. Impressed by her work, Emerson soon became Lazarus’ mentor. As she became a part of New York City’s literary elite, Lazarus would meet other well-known writers, including Robert Browning, William Morris and Henry James.

Lazarus was passionate about her Jewish heritage and hired a tutor to teach her Hebrew. She read and translated Jewish poetry, incorporating much of Jewish history in many of her written works. While she never documented any explicit acts of racism, Lazarus wrote of her outsider status as the only Jewish American in her elite social circles. She began advocating for the creation of a Jewish homeland before the term Zionism was even coined.

In the 1880s, Lazarus was moved by the plight of impoverished Jewish immigrants in the United States. She visited Jewish refugees who had fled Russia’s violent anti-Semitic pogroms and were living in makeshift shelters in New York Harbor. Lazarus raised money for the refugees, taught them English, and wrote works condemning anti-Semitism and urging her community to help. She also volunteered at the Hebrew Immigrant Aid Society and helped establish the Hebrew Technical Institute in New York, which provided vocational training to Jewish immigrants.

Lazarus wrote her poem “The New Colossus” in 1883 to sell at an auction raising money for the Statue of Liberty’s pedestal. In the sonnet, Lazarus calls the Statue the “Mother of Exiles.” The poem harkens back to Lazarus’ experience with Jewish refugees living along the harbor where the Statue would soon stand. While the poem met great acclaim at the time, it faded from public attention by the time of Lazarus’ death.

Lazarus died in 1887 at only 38 years old, likely from Hodgkin’s lymphoma. Her words, however, lived on. Fourteen years after Lazarus’ passing, her friend Georgina Schuyler unearthed the poem. Thanks to Schuyler’s efforts, a bronze tablet with an inscription of “The New Colossus” was placed on the Statue of Liberty’s pedestal in 1903.