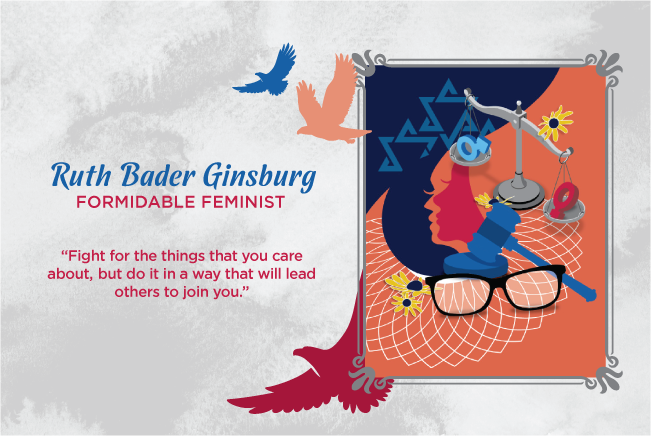 “Women’s rights are an essential part of the overall human rights agenda, trained on the equal dignity and ability to live in freedom all people should enjoy.” — Ruth Bader Ginsburg

Ruth Bader Ginsburg was born in Brooklyn, New York, in 1933. Throughout her life, she challenged traditional gender roles, fought for women’s rights and demonstrated perseverance in the face of difficulties.

From a young age, Ginsburg learned the importance of education from her mother, who did not attend college herself, but wanted that opportunity for her daughter. Ginsburg excelled at academics and made a habit of graduating at the top of her class, starting with Cornell University in 1954.

Though it was uncommon for a woman to study law in the 1950s, Ginsburg enrolled at Harvard Law School after having her first child. As she once explained, “I thought I could do a lawyer’s job better than any other.” There were only nine women in Ginsburg’s class of 500 at Harvard, and Ginsburg received criticism and ridicule from the institution’s authorities for having taken a man’s spot. This prejudice didn’t stop Ginsburg from serving as the first female member of Harvard’s Law Review or rising to the top of her class.

Ginsburg balanced these accomplishments with raising a young daughter and helping her husband, Martin, manage his law school studies as he battled testicular cancer. Once Martin recovered, the Ginsburg family moved to New York City. Ginsburg transferred to Columbia Law School to complete her final year of law school, serving on the Columbia Law Review and, once again, graduating first in her class in 1959.

Ginsburg had difficulty finding a job in the 1960s due to gender-based discrimination, but she eventually clerked for a judge in the Southern District of New York for two years. Following the clerkship, several law firms made Ginsburg offers — with salaries much lower than her male counterparts. Ginsburg rejected these offers, instead choosing a legal research project that allowed her (and her daughter Jane) to travel to Sweden.

Ginsburg would later say her “eyes were opened up in Sweden.” There, women made up a quarter of law school classes, childcare was readily available for Jane at the university where Ginsburg was researching, and Ginsburg observed a heavily pregnant judge ruling from the bench. (Later, Ginsburg would hide her second pregnancy from her colleagues at Rutgers University Law School.) In Sweden, Ginsburg saw what America sorely lacked.

Back in the U.S., Ginsburg taught at Rutgers and at Columbia, where she became the school’s first female tenured professor. She also co-founded and directed the Women’s Rights Project of the American Civil Liberties Union (ACLU) in the 1970s, fighting gender discrimination and successfully arguing six landmark cases before the U.S. Supreme Court. In 1980, former President Jimmy Carter appointed Ginsburg to the U.S. Court of Appeals for the District of Columbia. Ginsburg served there until 1993, when former President Bill Clinton nominated her to the Supreme Court of the United States.

As the U.S. Supreme Court’s second female justice and first Jewish female justice, Ginsburg advocated just as passionately from the bench as she had as an attorney. Ginsburg wrote 213 opinions in her 27 years as associate justice, many of them focused on gender equality, workers’ rights, and the separation of church and state.

In her famous 2007 dissent to a pay discrimination case, Ledbetter v. Goodyear Tire & Rubber Co., Ginsburg declared: “The court does not comprehend, or is indifferent to, the insidious way in which women can be victims of pay discrimination.” Two years later, Ginsburg worked with former President Barack Obama to pass the Lilly Ledbetter Fair Pay Act of 2009, making it easier for employees to sue against gender discrimination. Ginsburg also was a staunch defender of abortion rights throughout her time on the Supreme Court.

Ginsburg’s legacy is a full one, due not only to her many accomplishments, but also the challenges she overcame. At 66 years old, Ginsburg underwent surgery for colon cancer; 10 years later, she received chemotherapy for pancreatic cancer. During both ordeals, Ginsburg continued showing up for the Supreme Court’s oral arguments, where she was known for her tough questions. Ginsburg’s dedication to her health was comparable to her judicial zeal, and she worked with a personal trainer in the Supreme Court’s exercise room until her death in September 2020.

Following her passing, Ginsburg became the first woman to lie in state at the U.S. Capitol and lay in repose at the Supreme Court.