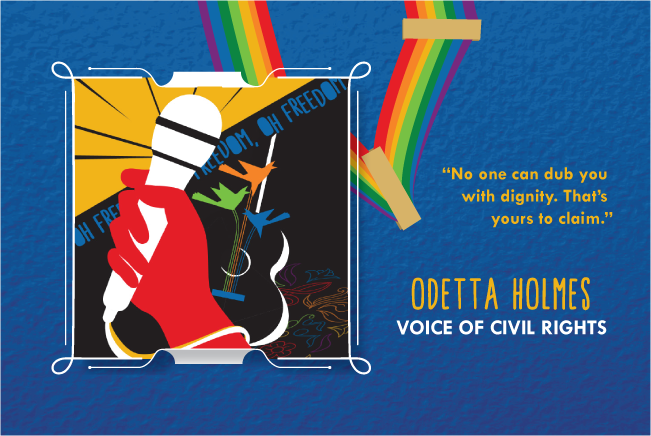 “Through those songs, I learned things about the history of Black people in this country that the historians in school had not been willing to tell us about or had lied about.” — Odetta Holmes

Odetta Holmes, better known as just “Odetta,” was born in highly segregated, Depression-era Birmingham, Alabama, on December 31, 1930. She was an American folk singer, actress, and a civil and human rights activist, often referred to as “The Voice of the Civil Rights Movement.”

She became acquainted with folk music in college and toured with a national road company of “Finian’s Rainbow,” a Broadway musical about prejudice.

In New York City, Odetta met fellow singers Pete Seeger and Harry Belafonte, who championed her work and introduced her to national audiences. Much like the American folk music revival, Odetta’s popularity peaked in the 60s, and she headlined at Carnegie Hall, as well as prominent nightclubs. Her 1963 release, “Odetta Sings Folk Songs,” became one of the year’s best-selling folk albums.

Beyond her music, Odetta was known for her activism in the civil rights movement. In 1963, Odetta sang at the March on Washington and also appeared with President John F. Kennedy on a civil rights television special. She then marched with Martin Luther King Jr. from Selma to Montgomery, Alabama, in 1965. King once called Odetta the “queen of American folk music.” Once, when Rosa Parks was asked what songs she listened to during the civil rights movement, she reportedly answered, “All the songs Odetta sings.”

Odetta’s unique musical style appealed to both African American and white audiences. She inspired and influenced many famous folk artists, ranging from Bob Dylan and Joan Baez to Janis Joplin and Tracy Chapman. Her Afro hairstyle and pride in her African features — on which the press often focused — made Odetta a role model for many African Americans. Through her music, she delivered a blend of traditional African American folk songs, chain gang songs, southern plantation work songs and spirituals. She once explained that the old prison songs she learned helped her work through her outrage at the racism she had experienced throughout her life:

“As I did those songs, I could work on my hate and fury without being antisocial.”

Odetta received many recognitions during her life for her musical accomplishments. In 1999, former President Clinton awarded her with a National Medal of Arts at the Daughters of the American Revolution’s Constitution Hall in Washington, D.C. — where, 60 years prior, Odetta’s hero and fellow Black contralto Marian Anderson was prevented from performing because of her race.  In 2003, the Library of Congress honored Odetta with the rare Living Legend Award.

Had she lived a bit longer, Odetta might have sung at the inauguration of former President Barack Obama, the first Black U.S. president. She died at age 77 in December 2008 of heart disease.