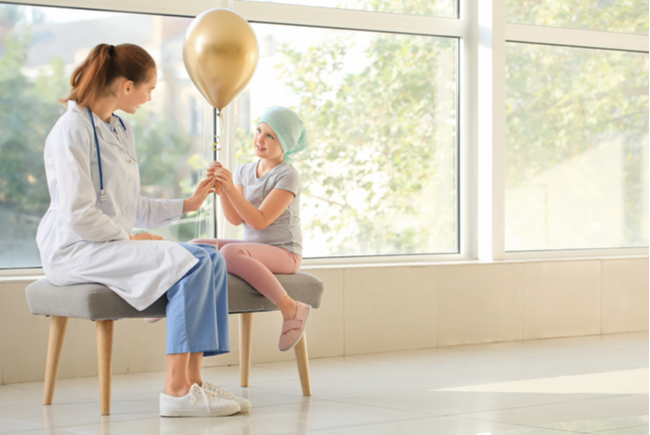 It is an unfortunate truth that only about 1% of cancer cases in the U.S. are diagnosed in children, yet behind accidents, it is the second most common cause of death for youth between 1 and 14 years old.

We’ve seen ads for children’s hospitals like St. Jude Children’s Research Hospital and their frequent requests for funding to support all those families enduring the unimaginable: a sick child. While the images are certainly sympathetic, what often is not apparent are some of the unique scenarios behind these ongoing pleas. I know because I was one of those mothers you see on TV, hoping against hope that my child would survive.

Our 4-year-old daughter was diagnosed with one of the most fatal forms of cancer on the planet, DIPG. In an instant she became part of a statistic: Approximately 1 in 285 children in the U.S. will be diagnosed with cancer before their 20th birthday.

One of the most frustrating aspects of the struggle we experienced was the scarcity of tailored treatment choices in the pediatric cancer world. Drugs created and tested for adults, usually for very different forms of cancer, are evaluated in the hopes that one of them might also work for children. We were lucky that we lived near Children’s National Hospital in Washington, D.C., with a prominent specialist on staff and a recently opened clinical trial for which our daughter qualified. However, her “best option” was radiation and a breast cancer drug, which everyone knew was unlikely to work.

She lived less than a year.

September is Children’s Cancer Awareness Month, and many iconic buildings and landmarks across the country are turning gold — the commemorative color for this cause — to raise awareness.

Why is turning gold so important this month? Because a decade after losing our daughter, not much has changed. Targeted drugs and the development of alternative treatments are still hard to come by in this field. No drug has been developed with the goal of treating any pediatric brain tumors, despite brain tumors being the deadliest form of cancer in children. This ad hoc approach is not a good strategy for pediatric cancer in general, as the types of cancer that occur most often in children are different from those seen in adults. Even similar forms of the disease will progress differently and require different treatment for children versus adults.

For families of young patients with cancer, especially those who have better treatment options and prognoses such as leukemia, the financial burdens of children’s cancers are significant and underappreciated. The staggering costs of treatment and logistical support necessary to care for these children are hard to absorb, even for families of some means. In addition, there are often emotional needs of siblings in processing and living with a sick family member. A recent New York Times article by CNN reporter Andrew Kaczynski — who recently lost his infant daughter to cancer — highlighted the significant employment and financial challenges experienced by parents and caregivers of children undergoing cancer treatment, especially for economically disadvantaged families.

That’s why Niagara Falls and other buildings, historic landmarks, monuments, bridges and natural environments are lighting up gold in September — to bring these realities out of the shadows and remind us all that we have a long way to go when it comes to both understanding and treating childhood cancer.

We need to raise awareness to generate the needed funding for drug and treatment research and development specifically addressing pediatric cancers. Research dollars for pharmaceutical development often go toward illnesses with a large patient bases — more patients mean more allocated resources to treat that disease. In many ways, this makes sense. However, this creates disincentives for investing in research in diseases with a smaller number of affected patients and makes discovery for cures for the youngest and most vulnerable very difficult.

Activists for childhood cancer like Ellyn Miller, whose daughter also died from DIPG, are working to increase dedicated dollars for research. Private charities and limited federal dollars are the main source of funding for pediatric cancer and it simply isn’t enough. From 2008 to 2018, the National Cancer Institute spent 4.08% of its resources on childhood cancer research.

Lighting up gold this month will help communities across the country to see and support these families dealing with pediatric cancer and provide financial and emotional services to the entire family during their journey — and hopefully, remission — from pediatric cancer.

The following organizations are spreading awareness, helping families and creating change this month and beyond for families facing this struggle: