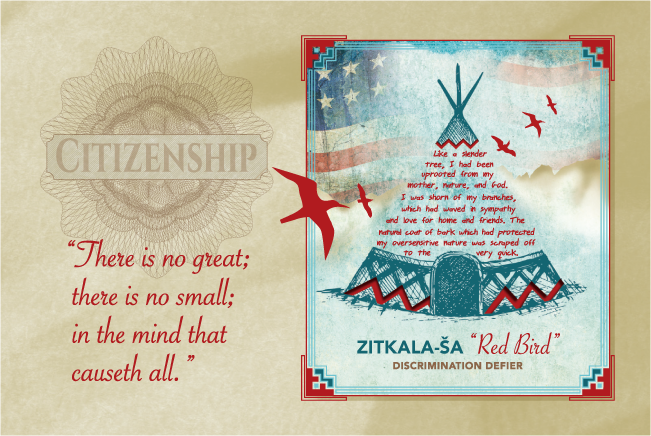 “The stain upon America’s fair name is to be removed, and the remnant of the Indian nation, suffering from malnutrition, is to number among the invited invisible guests at your dinner tables.” — Zitkala-Ša “Red Bird,” “American Indian Stories”

Zitkala-Ša (“Red Bird”) was born on the Yankton Indian Reservation in South Dakota in 1876 to a South Dakota Sioux mother and white father of French descent. Throughout her life, Zitkala-Ša had to navigate the two worlds of her Native American heritage and the white-dominant society where she studied, worked and published her writing and music. Today she is remembered for how she honored her culture while advocating for Indigenous people to become voting American citizens.

A pivotal event in Zitkala-Ša’s life occurred when she was only eight years old. At the urging of visiting Quaker missionaries, she and other children left home to attend a boarding school in Indiana. Zitkala-Ša had begged her reluctant mother to let her go to receive an education; she excelled at reading and writing in English, as well as playing the piano and violin. These joys were overshadowed with sorrow, however. Tribal languages were banned, and the children had to pray as Quakers. Upon the Native American children’s arrival, they were forced to have their hair cut — something akin to being held in captivity in Dakota culture. Zitkala-Ša would later describe the traumatic experience as “the day I lost my spirit.”

Upon graduating, she studied music, worked as a music teacher, and collected and translated stories from Native American tribes. In 1900, Zitkala-Ša returned home to recruit more students for the Carlisle Indian Industrial School in Pennsylvania, one of the most famous boarding schools in the country, where she was teaching music and speech. She was dismayed to find her community and home overtaken by extensive poverty, as white settlers had occupied land given to the Yankton Dakota people by the federal government.

Zitkala-Ša worked at the Carlisle School for less than two years. She began to question why the school required the children to give up their entire culture in exchange for an education. She saw the staff treat children cruelly, and learned that the government paid the school for every child successfully removed from a reservation.

Zitkala-Ša began writing about Native American life through her own autobiography as well as Lakota (Sioux) stories. In her writing, Zitkala-Ša criticized the American boarding school system. She also countered the racist stereotypes that had contributed to a loss of Native American identity and forceful assimilation into white society. Her work became well-known when national magazines, including Atlantic Monthly and Harper’s Monthly, began publishing her.

Over the next 10 years, Zitkala-Ša would return home to take care of her mother; collect stories for her book, “Old Indian Legends”; work at the Bureau of Indian Affairs (BIA) office at Standing Rock Indian Reservation; marry army Captain Raymond Talefase Bonnin; and collaborate on an opera. The first-ever written by an American Indian, the “Sun Dance Opera” was based on a sacred Sioux ritual prohibited by the U.S. government.

Although Zitkala-Ša did not live to see all 50 states allow Native Americans to vote (this wouldn’t happen until passage of the Voting Rights Act in 1965), she would spend the rest of her life working to improve the rights of Native Americans and preserve their cultural identity. In 1926, she and Bonnin founded the National Council of American Indians, which sought to unite the country’s tribes and gain suffrage for all American Indians. Zitkala-Ša also worked with white suffrage groups, was active in the General Federation of Women’s Clubs, and created an Indian Welfare Committee.

Zitkala-Ša died in 1938 and is buried alongside her husband at Arlington National Cemetery.