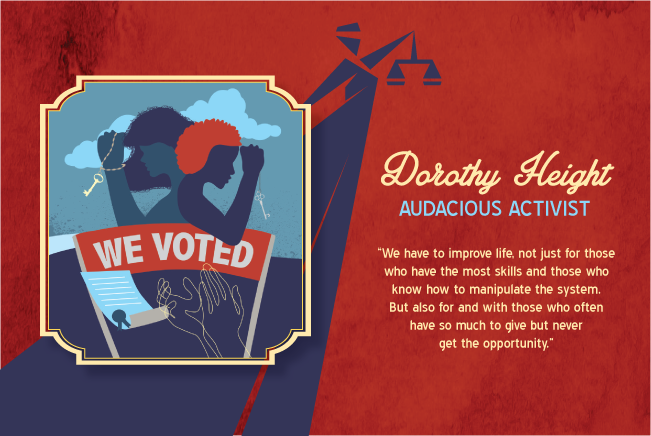 “If the time is not ripe, we have to ripen the time.” — Dorothy Height

Dorothy Irene Height, known as the “godmother of the civil rights movement,” was a courageous and outspoken civil rights and women’s rights activist who advocated for social issues into her 80s.

While attending high school in Pennsylvania, Height discovered two interests that would serve her throughout her life: a talent for public speaking and a passion for social justice. She began advocating for anti-lynching campaigns (in the footsteps of March Communicator of the Month Ida Wells) and received a college scholarship after winning a national public speaking competition.

Height was admitted to New York City’s Barnard College but was barred from attending due to a racial quota. Instead, she graduated from New York University with a bachelor’s degree in education and a master’s degree in psychology. After college, Height worked as a social worker in Harlem; later, as a civil rights activist, Height drew on her experiences in this role to combat discrimination and strengthen African American families.

Height joined the Harlem Young Women’s Christian Association (YWCA) in hopes of inspiring change and creating opportunities for African American women. There, she directed the integration of all YWCA centers and established its Center for Racial Justice. Height also began volunteering at the National Council of Negro Women (NCNW), founded in 1935 by Mary McLeod Bethune (who would eventually become Height’s mentor).

In 1957, Height became president of NCNW, a position she held for 40 years. Under her leadership, NCNW advocated for issues ranging from anti-lynching policy to school desegregation, employment opportunities, housing, restructuring of the criminal justice system and more. Her focus on voter registration, education and political mobilization was particularly significant to African American women. Despite passage of the 19th Amendment in 1920, many African American women would remain disenfranchised until passage of the Voting Rights Act of 1965 removed state and local legal barriers that prevented African Americans to exercise their right to vote.

While president of NCNW, Height played a vital role in the 1963 March on Washington, organizing thousands of female volunteers who mobilized a quarter-million people to rally on the National Mall. Despite her famed oratory talents, Height was not invited to speak, though she was seated on the speaker stage. In fact, Height and Anna Arnold Hedgeman — the only woman on the March’s organizing committee — had to fight for a female speaker to be included on the program at all.

Height’s contemporaries (including January Communicator of the Month John Lewis) recognized her as a critical leader of the civil rights movement, a persuasive fundraiser and an unparalleled mediator. Height was especially skilled at bridging racial, regional and class divides between African American and white women. She advocated for the inclusion of more African American women in government leadership positions. In 1971, Height helped found the National Women’s Political Caucus with Gloria Steinem, Betty Friedan and Shirley Chisholm. She also served as a political adviser on civil, human and women’s rights issues for philanthropist Eleanor Roosevelt and former presidents Dwight D. Eisenhower, Lyndon B. Johnson and Bill Clinton.

Height received many awards recognizing her tremendous impact as a civil rights leader and community organizer. She received the Presidential Citizens Medal in 1989, as well as America’s two highest civilian awards: the Presidential Medal of Freedom (1994) and the Congressional Gold Medal (2004).