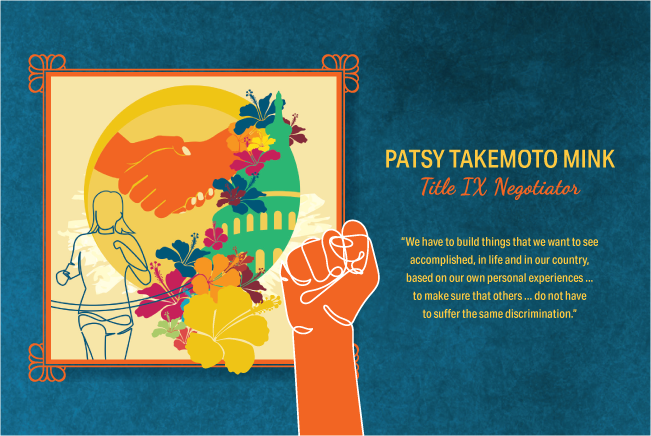 “I have been away from the Congress for about 14 years, and I am astonished to find that in the first month of my return here … we are still debating the question of what equality really means in this country.” — Patsy Takemoto Mink

Patsy Takemoto Mink broke numerous barriers throughout her career as a lawyer and public servant. She wasn’t afraid to speak openly about the racial and gender discrimination she faced as a woman and as a person of color. Spurred on by these experiences, Mink dedicated her life’s work to ensuring the equity, equal rights, and social and political inclusion of all women, immigrants and children in America.

Educational opportunity was an integral theme throughout Mink’s life. A “Sansei,” or third-generation Japanese American born in Hawaii, Mink graduated valedictorian from her high school in Maui. In college, she studied zoology and chemistry in hopes of pursuing a career in medicine. However, Mink had to give up this dream when more than a dozen medical schools rejected her application based on gender.

Mink pivoted to law school with the goal of one day changing the country’s discriminatory legislation. It was then that Mink started earning her many “firsts”: She earned a Juris Doctor from the University of Chicago in 1951, becoming the first Sansei woman to do so. She soon became the first Japanese American woman to practice law in Hawaii.

Mink faced racial and gender discrimination when applying for employment to large Honolulu law firms. She instead established her own private law practice, lectured at the University of Hawaii and founded the Oahu Young Democrats in 1954. Mink won a seat in Hawaii’s territorial house of representatives in 1956 and 1958, followed by a seat in the territorial senate from 1958 to 1959. Once Hawaii achieved statehood in 1959, she served in the Hawaii State Senate from 1962 to 1964 and chaired the education committee.

In 1964 — less than a decade after launching her political career — Mink would become the first woman of color and the first Asian American woman to serve in Congress. Mink represented Hawaii’s 2nd Congressional District in the U.S. House of Representatives for 12 terms, from 1965 to 1977 and 1990 to 2002.

During her first six terms in Congress, Mink helped pass much of the 1960s Great Society reforms spearheaded by former President Lyndon B. Johnson. Throughout her congressional career, she worked on legislation that would leave a lasting impact on the country, often facing significant opposition while doing so. Her colleagues in the House revered her as a tenacious negotiator and leader in educational and women’s issues. Talented at bringing people together, Mink created coalitions promoting health care, education and welfare for individuals in need. She supported legislation on early childhood education, bilingual education, childcare, student loans, support for students with disabilities and more.

Mink may be best known for her role in co-authoring and advocating for the groundbreaking Title IX Amendment of the Higher Education Act, passed in 1972. Title IX promotes equal treatment for women and men in education by mandating equal funding for women’s academic and athletic programs at federally funded institutions. The law was renamed the “Patsy T. Mink Equal Opportunity in Education Act” following her death in 2002.

Following her first six terms in Congress, Mink served as president of Americans for Democratic Action and assistant secretary of state for the Bureau of Oceans and International Environmental and Scientific Affairs. In 1990, she was reelected to the House of Representatives and served six more terms. During this time, she also co-founded the Congressional Asian Pacific American Caucus.

Mink was posthumously inducted into the National Women’s Hall of Fame in 2003 and awarded a Presidential Medal of Freedom in 2014.