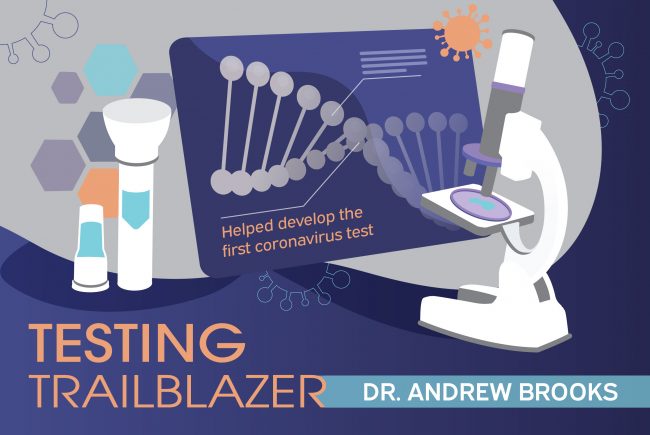 “It means we no longer have to put health care professionals at risk. We can preserve precious personal protective equipment for use in patient care. We can significantly increase the number of people tested each and every day.” — Dr. Andrew Brooks

A leader in the fight against COVID-19, Dr. Andrew Brooks designed and developed the first approved coronavirus saliva test. Although it seems rather routine now, when the U.S. Food and Drug Administration approved this method in April 2020 it was the first of any test permitted for home use.

The early days of the pandemic saw a scarcity of tests, where lines to get tested — whether walk-up or in cars — stretched for blocks. For those who could secure a test, there was confusion about its accuracy. Today — thanks to Brooks — people can stay at home, spit into a tube and quickly get results that have proven to be more accurate than nasal or oral swab tests.

As a young student, Brooks was interested in becoming a veterinarian and majored in animal sciences at Cornell University. But when he took a summer internship at Memorial Sloan Kettering Cancer Center, he became fascinated by human disease. He went on to get a Ph.D. in neuroscience from the University of Rochester where he worked for four years, becoming director of its Medical Center Core Facilities.

But it wasn’t until he returned to New Jersey to take a job at the Rutgers Cell and DNA Repository (RUCDR), a university-owned company that provides data management and analysis for biological research, that he discovered he enjoyed the business side of science. In 2009, he became RUCDR Infinite Biologics’ chief operating officer and director of technology development, where he expanded the small company to nearly 250 employees. Along the way, he worked with nearly every major pharmaceutical company in the country.

It was here that his business acumen proved essential. His effort to develop the saliva rapid test was important, but without scaling up production operations to meet massive demand, the test would not have reached enough scale to make a difference. Almost overnight, Brooks secured the funding necessary to nearly double his staff, buy additional equipment and produce the test in huge quantities. His vision and perseverance upended the testing process, radically increasing its speed and safety.

To this day, the test has been used more than 4 million times and is the foundation upon which all other coronavirus saliva tests are built. It has saved countless lives by preventing the spread of COVID-19 from infected individuals.

Following his sudden death in January 2021 from a heart attack, New Jersey Governor Phil Murphy recognized Brooks and his contributions, calling him “One of our state’s unsung heroes.” He continued, “We cannot thank Andy enough for all he did across his career.”