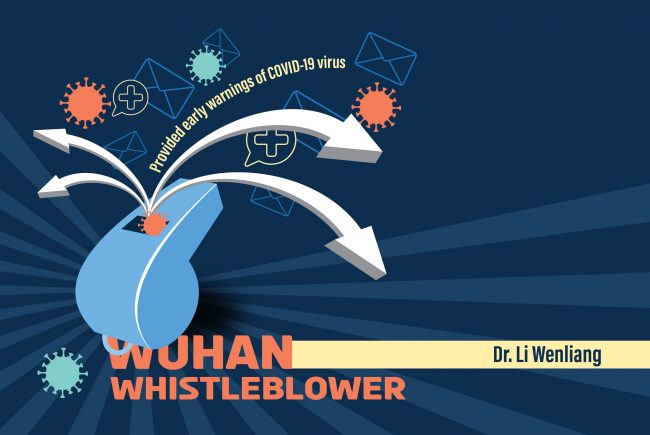 “I think a healthy society should not only have one kind of voice.” — Dr. Li Wenliang

In 2019, Dr. Li Wenliang was a relatively obscure 33-year-old ophthalmologist in Wuhan, China. He was expecting a second child with his wife. He had attended Wuhan University’s School of Medicine, studying clinical medicine in a seven-year combined bachelor’s and master’s degree program.

But on December 30, 2019, Li discovered a strange new virus. One of his patients at the Wuhan Central Hospital had showed symptoms of an illness that resembled severe acute respiratory syndrome (SARS), the same virus that had ravaged China two decades earlier. He sent a message to a group of fellow doctors telling them that, in fact, there were seven confirmed cases of this new virus at the hospital. All had been tracked back to the Wuhan Seafood Market. He warned colleagues about a possible new outbreak and encouraged them to wear protective gear. It was meant to be a private message.

But in the middle of the night, Chinese officials summoned Li and demanded to know why he had shared the information. Days later, in detainment, he was forced to sign a declaration that he had made false statements that disturbed the public order. Li was released from detainment and returned to work.

He never could have expected that in the days and weeks that followed, he would come to be regarded across China and the world as a courageous whistleblower. He was one of the first people to recognize the outbreak of what we know now as COVID-19 in Wuhan that has killed more than five million and infected more than 279 million people around the world. And as the global public remained largely in the dark about the virus, Li’s initial message — which spread like wildfire across social media — helped doctors quickly piece together that the new public health threat was related to SARS.

The story of his discovery, and apprehension by the Chinese government, spread far and wide. “We demand freedom of speech” became a trending hashtag on Weibo, China’s version of Twitter.

But Li quickly became a martyr for freedom of expression. In the early days of January 2020, Li came down with symptoms of the same virus he had first discovered weeks earlier. Before passing away on February 7, Li decided to speak out from his hospital bed about his experience. “I think a healthy society should not have just one voice,” he said. Just days before his death, Li pushed for government reforms and transparency, detailing the Chinese government’s missteps in handling the crisis: “If the officials had disclosed information about the epidemic earlier, I think it would have been a lot better. There should be more openness and transparency.”

Two years after his death, people flock to his final post on his Weibo account, thanking him for his courage; there are more than one million comments posted.

“After I recover, I still want to return to the front line,” Li told The Southern Metropolis Daily, a Chinese newspaper, in the days before he died.