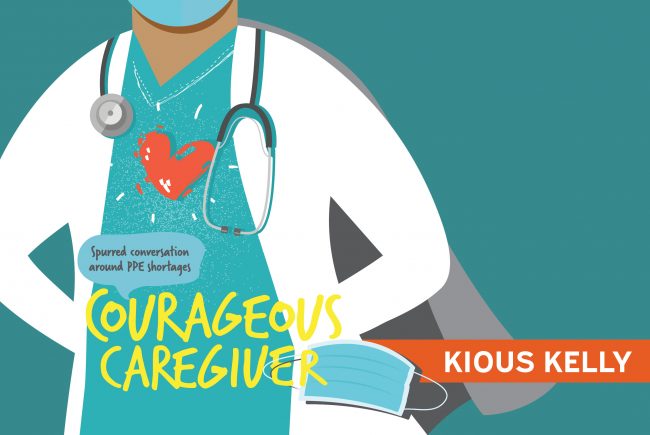 “He served with love. If you needed care, you would get it. He ran toward the oncoming enemy determined to bring survivors back with him. That’s who he was.” — Mayra Sherron, Kious Kelly’s sister

An assistant nurse manager at Mount Sinai West hospital in Manhattan, Kious Kelly is believed to be the first nurse in New York City to die from COVID-19. He was 48 years old. His death incited a national outcry for safer working conditions for health care workers on the frontlines of a worldwide pandemic who were becoming infected with the coronavirus due to significant shortages of personal protective equipment (PPE).

New York hospitals experienced some of the worst shortages in the United States. At Mount Sinai itself, hospital staff posted photos on social media of nurses wearing trash bags as protective gear and reported reusing N-95 masks for multiple shifts. Reports like these became overwhelmingly prevalent across the country in the weeks and months that followed. Kelly’s death was one of the first tragedies to signal alarm about the dangers frontline workers were facing as they responded to the COVID-19 pandemic.

With an aptitude for both art and science, Kelly was offered an engineering scholarship as well as a dance scholarship to go to college. He decided to pursue his passion, accepting a scholarship from Butler University to study performing arts and dance. After graduating in 1993, Kelly moved to New York and performed with professional dance companies until his late 30s.

When it was time to embark on his next career, Kelly chose to go to nursing school. According to his sister, Mayra Sherron, nursing appealed to Kelly because he wanted to help people. This sentiment is reflected in the stories shared by Kelly’s patients and coworkers at Mount Sinai West hospital, where he worked after graduating from nursing school in 2012 until the time of his death.

Stories of Kelly’s kindness include giving his coat to a patient who was homeless so they would not be cold after being discharged from the hospital and going to a nearby drugstore to buy batteries for a patient’s hearing aids.

Since her brother’s death, Sherron — along with many colleagues at Mount Sinai West — has been outspoken on social media and in the press about the PPE shortages that led to thousands of COVID-19 infections among health care workers in 2020. Her brother was among the first to become infected, and while she could not save his life, Sherron continued to fight for the lives of other dedicated frontline workers like him. Her advocacy helped garner attention from policymakers and journalists, and it contributed to PPE shortages becoming a major topic of national conversation.