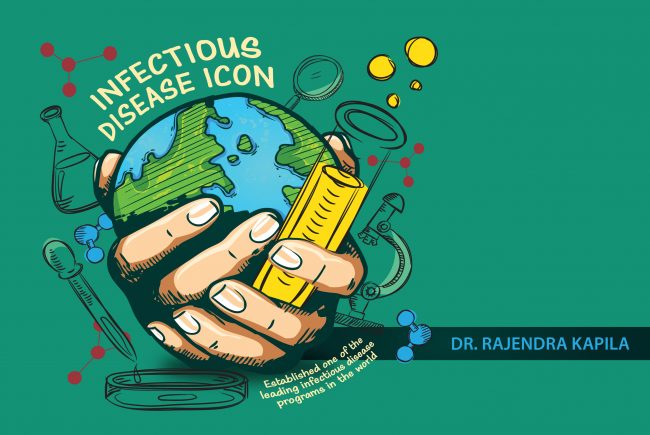 “For 50 years, Dr. Kapila served as a foundational pillar of New Jersey Medical School, the Martland Hospital and University Hospital where he provided care to tens of thousands of patients and trained numerous generations of medical students, residents and fellows. A genuine giant in the field of infectious diseases, Dr. Kapila was recognized world-wide and sought out for his legendary knowledge and extraordinary clinical acumen in diagnosing and treating the most complex infectious diseases.” — Rutgers University

A doctor, a teacher, a professor, a genius. Those are the words colleagues, students, family and friends use to describe Dr. Rajendra Kapila, a true icon in the world of epidemiology. For more than 50 years, he worked tirelessly in the field of global infectious diseases making major medical contributions, including some of the first observations about the AIDS epidemic. When the COVID-19 pandemic began to emerge as a dominant threat, Kapila’s expertise was highly sought.

Kapila received his medical degree in 1964 at the University of Delhi and completed his residency at Irwin Hospital in India. Upon finishing his residency, he moved to the United States where he became an intern, resident and fellow at Martland Hospital in Newark, New Jersey. After his schooling, his success in the medical field moved quickly. He became a professor at the University of Medicine & Dentistry of New Jersey, where he received a teaching award, became an attending physician and chair of the Infection Control Committee, and even founded the University’s Division of Infectious Diseases. In his tenure there, Kapila published more than 100 articles and was the first person in the U.S. to suggest HIV-2 as a cause of AIDS. His groundbreaking research led to changes in blood bank practices, saving many lives.

When the coronavirus began to spread, Kapila was hard at work in a research lab learning more about the disease and how it could be treated. His diligence was unmatched; at 81 years old, he was intent on helping the nation and world heal from this pandemic. Once he had received two doses of the Pfizer vaccine, Kapila travelled to India where the virus was spreading at alarming rates. His trip was intended to be short and provide an opportunity for him to care for his family during the crisis. In service to his loved ones, Kapila contracted COVID-19 himself. He was admitted into the Shanti Makund Hospital in New Delhi, where on April 28, 2021, he died from heart complications.

His loss rocked the medical community; it was shocking and tragic. Yet his contributions as an epidemiologist paved the way to save people across the globe from infectious diseases like COVID-19.

When reflecting on his incredible career and accomplishments, his peers described him as a man who was “humble and cared about humankind and was always caring for patients while also being helpful to his professional colleagues. He was a true teacher, a true professor, a true genius … a gem for the infectious disease society.” Other colleagues said he was a “superstar” with an impact on the field that will be long-lasting.

The tens of thousands of patients he treated and generations of medical students he taught are a testament to his devotion to rid the world of disease.