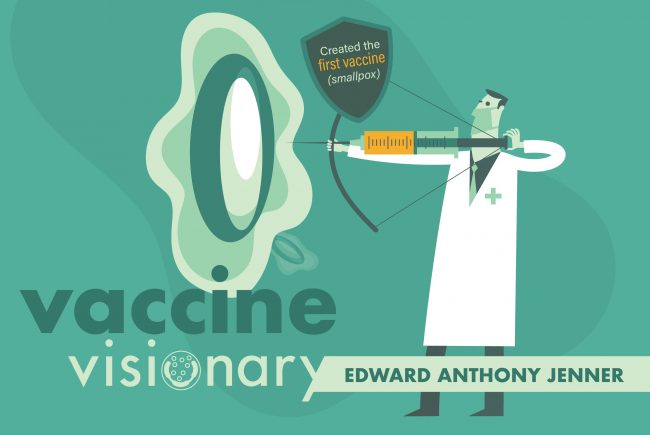 “I hope that some day the practice of producing cowpox in human beings will spread over the world; when that day comes, there will be no more smallpox.” — Edward Jenner

Edward Jenner, an English surgeon and discoverer of a vaccination for smallpox, was born in Berkeley, Gloucestershire, to Rev. Stephen Jenner, vicar of Berkeley, and Sarah Jenner.

Tragically, Jenner was orphaned at age 5 and raised by his older brother. During his grammar school years, he developed a strong interest in science and nature that continued throughout his life. At age 13 he was apprenticed to a nearby surgeon, where he spent eight years acquiring knowledge of medical and surgical practices. At the age of 21, he moved to London and became the house pupil of John Hunter, one of the most prominent surgeons in the city who was on the staff of St. George’s Hospital. Hunter was also an anatomist, biologist and experimentalist, which greatly interested Jenner.

During this time, smallpox was a leading cause of death worldwide. The only means of combating smallpox was a primitive form of vaccination called variolation — where those who had never had smallpox were exposed to cells from live smallpox sores by scratching the material into their arm or inhaling it through the nose. After recovering from a mild case of the disease, the individuals became immune.

In 1796, upon his return to the Berkeley countryside, Jenner noticed that milkmaids who had gotten cowpox — a relatively harmless disease that could be contracted from cattle — appeared to be protected from smallpox. Pondering this phenomenon, Jenner hypothesized that cowpox not only protected an individual against smallpox but could be transmitted from one person to another as a mechanism of protection.

To test his theory, Jenner found a young dairymaid who had fresh cowpox lesions. Using matter from these fresh lesions, he inoculated a young boy who had never had smallpox. While the boy became slightly ill, he fully recovered. When Jenner inoculated him again, this time with smallpox matter, no disease developed.

More experiments followed, and in 1801, Jenner published his treatise “On the Origin of the Vaccine Inoculation.” In this work, he summarized his discoveries and expressed hope that “the annihilation of the smallpox, the most dreadful scourge of the human species, must be the final result of this practice.”

After his breakthrough success, Jenner was made the official physician to King George IV and added as a member of the Royal Society. He was also made the Mayor of Berkeley for his wisdom and philanthropy. In addition, the technique of introducing material under the skin to produce protection against disease later became universally known as vaccination, a word derived from the Latin name for the cow (vacca), in Jenner’s honor.

In 1967, the World Health Organization (WHO) launched its intensified campaign to eradicate smallpox worldwide. At the time, they estimated that there were around 15 million cases of smallpox each year. Their approach was to vaccinate every person in the most high-risk areas. In 1980, after a period of watching for new cases, the WHO declared that the most feared disease of all time had been eradicated, fulfilling a prediction that Jenner had made in 1801. It has been estimated that the task he started has led to the saving of more human lives than the work of any other person.

The last remaining specimens of the smallpox virus are now held in two laboratories in Siberia and the U.S. The samples, used for research, are afforded higher security than a nuclear bomb.