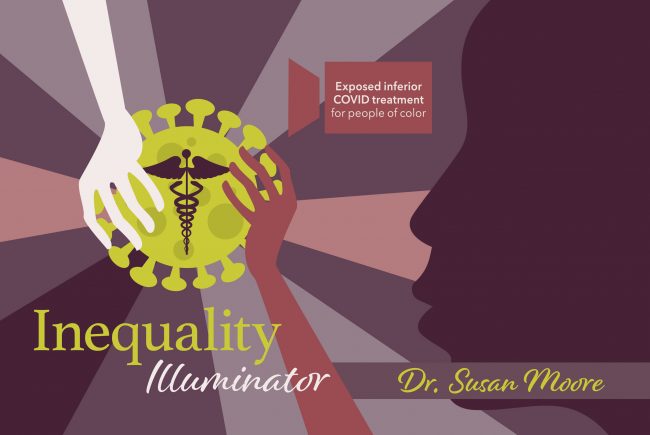 “Why do I have to prove that there’s something wrong with me in order for pain to be treated? This is how Black people get killed. I put forward and I maintain that if I was white, I wouldn’t have to go through that.” — Dr. Susan Moore

Born in Jamaica, Dr. Susan Moore immigrated with her family to Michigan when she was a young child. It was here that she earned an engineering degree from Kettering University and a medical degree from the University of Michigan Medical School. Bright and talented with a passion for helping those in need, she went on to become a geriatric medicine specialist.

Moore knew hospitals like the back of her hand. Living with sarcoidosis, an inflammatory disease that attacks the lungs, she had ample experience as both a doctor and a patient. She knew when something wasn’t right with her body.

On November 29, 2020, Moore tested positive for COVID-19. With a fever and racing pulse, she was admitted to the hospital where she had to fight for treatment every step of the way. In the caption of her now-viral Facebook video, she relayed how her attending physician, who was white, “… did not even listen to my lungs. He performed no physical exam.” She said the doctor tried to send her home despite her symptoms and excruciating pain and the nurse left her to suffer for hours without pain medication.

Moore was told she didn’t need pain management. “I was in so much pain. I was crushed. He made me feel like a drug addict and he knew I was a physician,” she said in the video posted on December 4, 2020.

After contacting a patient advocate and the chief medical officer of the hospital’s health care system, Moore began to receive proper care. Unfortunately, the obstruction and subsequent delay of her treatment had caused irreparable damage.

After a few days, Moore was discharged, but less than 12 hours later, she was readmitted to a different hospital where she was given pain medication and, in her words, “compassionate care.” Still, Moore was intubated on December 10, 2020, and ultimately died due to complications from COVID-19 on December 20, 2020.

Her video and death sparked national outrage, much like the death of front-line nurse Kious Kelly. Both highlighted the shortcomings of the U.S. health care system in response to the pandemic, particularly for communities of color. Moore’s case brought to light how the pain of Black people, especially Black women, is often ignored due to the widespread, misguided and dangerous belief that Black people feel less pain than white people.

Dozens of news articles, thousands of tweets and multiple protests followed Moore’s death. Op-eds and petitions decrying the disparities in health care multiplied as hundreds flocked to Moore’s Facebook page to pay their respects. Data regarding the differences between races in outcomes of COVID-19 infections were brought to light, including the staggering fact that during the first year of the pandemic, Black people died at 1.4 times the rate of white people.