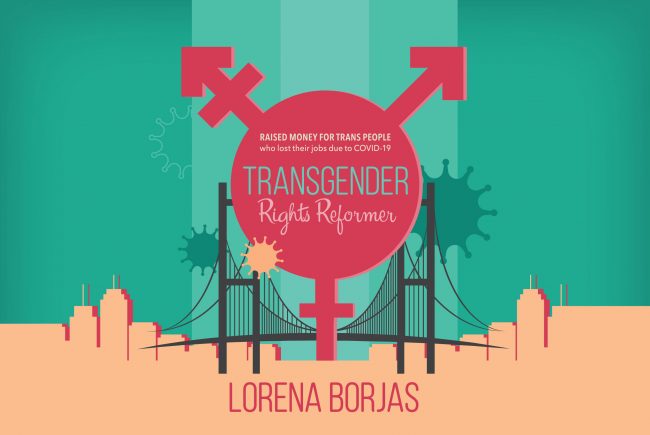 “We were women without families and who had run away from our countries, persecuted for expressing our identity, for being ourselves.” — Lorena Borjas

Mexican-born Lorena Borjas was known as the mother of the transgender Latinx community in Queens, New York. She fought tirelessly for transgender women, undocumented immigrants, sex workers and those living with HIV/AIDS, despite facing numerous challenges and traumas in her personal life.

Identifying as a gay man at the time and unable to see a future for herself in Mexico, Borjas came to the United States at 20 years old to seek hormone therapy and eventually transition. She became a legal permanent resident in 1990, but was unable to apply to become a U.S. citizen until 2017, when former New York Governor Andrew Cuomo granted her a pardon (from charges of trafficking and forced prostitution — of which she was a victim and not perpetrator) in recognition of her community activism. She became a U.S. citizen in 2019.

Borjas began her life as an activist in 1995. Cristina Herrera, founder and CEO of Translatina Network and a friend of Borjas’, said that “Lorena brought light to us when we were living through a very dark time here in New York,” such as a crack epidemic, an AIDS crisis and changes in immigration policies. Borjas could often be seen handing out free condoms to sex workers, setting up syringe exchanges to protect transgender people going through hormone therapy and even arranging an HIV testing clinic in her own home. In addition, she assisted transgender Latinx immigrants in accessing legal counsel and mental health services.

Borjas was particularly interested in breaking the arrest-jail-deportation cycle. In 2011 she and Chase Strangio, a friend and colleague, founded the Lorena Borjas Community Fund, which gives bail and bond assistance to transgender immigrants in criminal and immigration proceedings.

In March 2020, Borjas was worried about her transgender family, specifically how they were going to cope with the COVID-19 pandemic. She had just set up a transgender emergency relief fund for COVID-19, benefitting the LGBT Center Intercultural Collective, when she herself tested positive for the virus. At age 59, Borjas died at Coney Island Hospital from complications due to COVID-19.

Her story, however, does not end there. In recognition of her unwavering activism for nearly 40 years, in June 2020 Borjas’ name was added on the National LGBTQ Wall of Honor ― dedicated to LGBTQ “pioneers, trailblazers and heroes” ― located within the Stonewall National Monument in New York City’s Stonewall Inn. In addition, on the anniversary of her death in 2021, Baxter Avenue on 83rd Street in Queens — where Borjas lived and worked — was renamed Lorena Borjas Way.