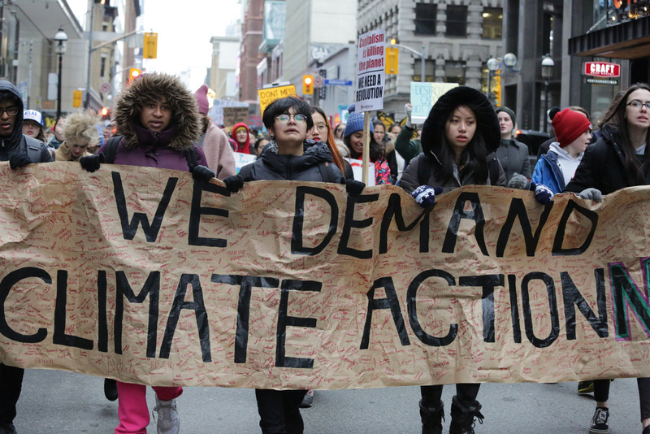 Since 2017, Vanguard has partnered with the Cisneros Hispanic Leadership Institute to fund Comunicadores for the Future, a paid internship program that supports the next generation of Latinx communicators. Sofia Llovet-Nava is one of the program’s 2022 interns.

This summer, Vanguard’s Comunicadores for the Future program has given me the opportunity to intern for Oxfam America, an international anti-inequality organization that I’ve admired for years. As an international affairs major, I’m not only grateful for the opportunity to gain professional and communications skills in the field of international development, but also for the authentic glimpse into progress and change-making that this internship has given me. Every day, I’m in awe of the way that every small communications project fits together into the greater picture of Oxfam’s advocacy campaigns.

Most recently, Oxfam has been working on relaunching its climate campaign, with a special focus on advocating for the full restoration of the National Environmental Policy Act (NEPA). NEPA was significantly damaged under the previous presidential administration, with the removal of many environmental reviews that would be required prior to the construction of infrastructure projects, as well as the redefinition of the term “environmental effects.”

Although President Biden has released phase one of his revisions, the process continues to be delayed and the timeline for NEPA’s restoration remains unconfirmed. Oxfam’s climate communications team is creating a NEPA strategy for the public comment period that will follow Biden’s announcement of the new NEPA draft.

Due to the supporter-facing nature of Oxfam’s advocacy campaigns, the climate communications team is in the process of creating a climate communications strategy that is digestible, empowering and solutions-focused. NEPA is an extremely comprehensive policy that can be hard for supporters to fully understand. In order to combat apathy and confusion, the campaign will launch with an email call to action to take a quiz that will educate supporters on NEPA, along with a follow-up email a month later to sign a petition and participate in the comment period.

Summarizing and highlighting key points remains an important way to reach a greater audience. The team’s strategy involves brainstorming a meaningful, memorable tagline for the campaign, as well as homing in on a single part of the many unrestored portions of NEPA. Primarily advocating for a single cause — rather than many small, technical changes — makes the campaign more understandable to an audience that may not know what NEPA is, or the retracted portions that are at stake.

In addition, they are focusing on using storytelling as a key feature of creating a more impactful, attention-grabbing narrative that will inspire support. Authentic storytelling provides a human side to the unrestored statements in a policy that could seem abstract, far away and trivial. It also drives engagement and increases the likelihood that readers will engage with a call to action, such as a petition or email-writing campaign.

The story of NEPA’s damage and restoration fits into the climate campaign’s greater narrative that the United States has a responsibility to enact comprehensive climate action as a top emitter. By addressing its own present and historical climate impacts, the U.S. plays a major role in the plan for a just energy transition. Through campaigns like Oxfam’s, we can all learn and take steps toward being part of the solution to the climate crisis.