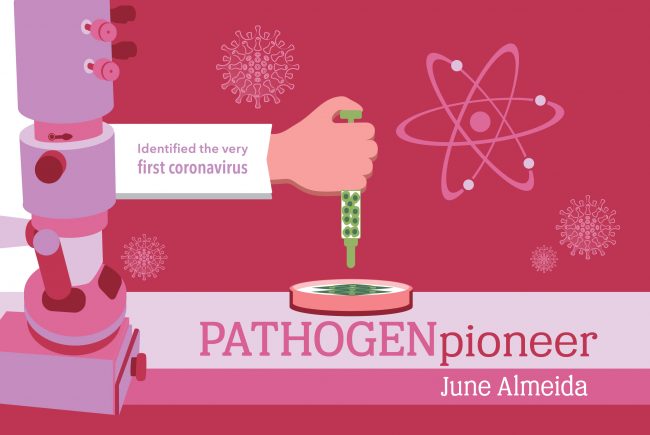 In 2020, the world wanted to know more about the “new” virus that causes COVID-19 and managed to shut down the entire planet in a matter of days. But coronaviruses aren’t new; prior to COVID-19, they had been causing other infectious diseases for years.

The first human coronavirus was discovered in 1964 by June Almeida, an electron microscope expert who made many groundbreaking scientific discoveries despite dropping out of school at age 16.

Born in Glasgow, Scotland, Almeida’s passion for science started at a young age, spawning from the death of her younger brother to diphtheria (a serious infection caused by strains of bacteria) in 1940.

At the age of 16, Almeida won the top science prize at Whitehill Senior Secondary School. She hoped to pursue a career in science, but her family lacked the financial means to afford college tuition. Instead, she left school and took a job as a lab technician in histopathology (studying and diagnosing tissue disease) at the Glasgow Royal Infirmary to help her parents pay the bills. It was there that she learned to examine tissue under a microscope for signs of disease. After a short time, she moved to London to work in a similar position at St. Bartholomew’s Hospital.

In 1954, Almeida married and moved to Canada. While there, she worked at the Ontario Cancer Institute as an electron microscopy technician. She quickly became known for her proficient use of the microscope, but more specifically for her perfection of a technique called “negative staining” — where tiny virus particles become clearly visible, allowing them to be classified according to their shape.

Under this extremely powerful microscope, Almeida could use antibodies taken from previously infected individuals to pinpoint the virus within, providing clinicians with a new way to diagnose viral infections. While scientists had been studying these viruses for decades, negative staining allowed Almeida to see them closer than ever before and create detailed pictures for the field. She went on to identify a host of viruses, including rubella, and published several papers describing the structures of viruses previously unseen.

Almeida was persuaded to move back to London to work at St. Thomas’ Hospital, where she researched a mystery virus known as B814 for a group of scientists who had collected samples of the flu-like virus from a boy in Surrey. The scientists knew there was something different about B814, but they needed a quality image to learn more. Using her negative-staining technique, Almeida was able to create a clear picture of the virus, eventually concluding that B814 was from a new family of viruses. Unlike most viruses she and her team had seen before, the round, grey dots she saw were covered in tiny spokes or rods that formed a sort of halo around the core — much like the sun’s corona.

It was from these images that Almeida helped name the new family “coronavirus.”

Almeida retired from virology in 1985 but remained active and curious. Before her death in 2007 at the age of 77, she returned to St. Thomas’ Hospital as an advisor and helped publish some of the first high-quality images of HIV, the virus that causes AIDS.