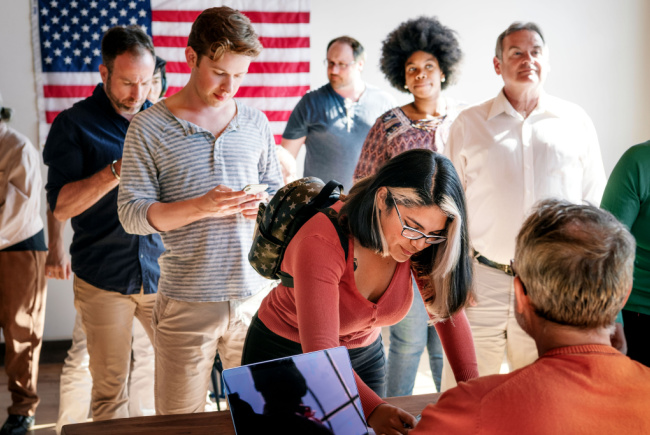 Friday marks Women’s Equality Day, an observance that has been around for nearly 50 years commemorating the certification of the 19th amendment in 1920—giving most women the right to vote. This was a foundational achievement in the fight for women’s equality in the United States, and it would seem that women across the country should be celebrating on Aug. 26.

However, the past year has introduced new threats to women’s voices and choices and revealed a crack in the foundation of rights we thought would be protected for generations to come.

Headlines in 2022 signal that the progress women have fought for and won over the past 100 hundred years is under attack—some very publicly, and some possibly flying under the radar. Together they raise a red flag that women’s equality is taking a step backward.

I spoke with Sarah Courtney, Chief Communications Officer of the League of Women Voters of the US (the League), to discuss where we stand as women in today’s America and how communications professionals can message both the problem and the solution.

Q: As the chief communications officer of an organization designed to empower women, where would you say women’s equality is today, on a scale of 1 to 10?

A: Ruth Bader Ginsburg was often asked when there would be enough women on the Supreme Court, and her answer was always, “When there are nine.” I think about that a lot. To reach true equality, you have to bend the branch back. We have to over-correct the imbalance and counter our current underrepresentation by placing more women in positions of power, out-earning and out-performing men across sectors. There has been progress in some areas, but we are far from equal.

This year it feels like we’ve seen a major step back for women. This summer the Supreme Court decision rolled back nearly 50 years of reproductive freedoms. It’s hard to put a number on it, but we’ve certainly seen setbacks compared to just a few years ago. As a mother, it pains me to think my daughter is growing up with fewer rights than I had.

Q: What do you think is the most important thing women should know about their rights today? How does the LWVUS communicate these messages, particularly in such a politically charged environment?

A: Everything connects to voting. No matter what your values are, your vote is your power, and the best tool for having your priorities met is to elect leaders who share your vision for our future. At the League, we talk about “power building” a lot. In women-led spaces, we see that power leveraged and shared to strengthen our communities. Our goal is not to eclipse others but simply to ensure that women are heard and have access to all the same tools of democracy.

Q:  What is the greatest challenge to women’s equality today?

A: Voter suppression. Women experience unique challenges when it comes to voting, from childcare (being able to get to the polls) to name changes (being turned away because their ID name doesn’t match their registered name, which is more likely to impact women following marriages or divorces). 80% of election administrators are women, and this year we are seeing a shortage of poll workers. The League is partnering with Power the Polls to recruit more election workers for the midterms. Without enough poll workers, there will be fewer polling locations, leading to accessibility and transportation obstacles, and voters will face longer wait times and less in-person support if they require assistance. That in and of itself is a form of suppression.

Redistricting — especially partisan gerrymandering — and recent legal challenges to fair political maps nationwide is another form of voter suppression and will play a significant role in the upcoming midterm elections. When new district lines are drawn to intentionally decrease the power of voters based solely on their political party or demographic characteristics, it undermines the pursuit of equality and suppresses the voices of women voters at the ballot box. All voices should be heard in our elections, our democratic process, and at every level of government, which is why fighting voter suppression efforts in every form is a top priority for the League when advocating for women’s equality.

Q: Aug. 26 is the anniversary of when the 19th amendment was certified by Congress, which has particular significance for your organization. What are your plans to commemorate this day?

A: In years past we have celebrated this milestone while acknowledging that the 19th amendment did not solve voter access for all women. Black and brown women, and women experiencing lower incomes, still faced challenges through voter suppression (poll taxes and literacy tests) until the Voting Rights Act was passed in 1965.

This year we are leading a campaign to draw attention to the many inequalities women continue to face. Voter suppression is on the rise with hundreds of anti-voter bills since the 2020 elections, and while those bills may not target women specifically, we are no doubt affected. We cannot celebrate equality when our rights are being taken away.

We are joined by more than 30 female-led partner organizations in demanding that Congress pass voting rights legislation, add the Equal Rights Amendment to the Constitution, and restore reproductive freedoms for women and those who can become pregnant.

We are calling attention to the state of women in today’s democracy to energize all women to make their voices heard during the November elections.

For more information about how the League is messaging the state of women’s equality today, check out https://www.lwv.org/equal-rights/womens-inequality-day.