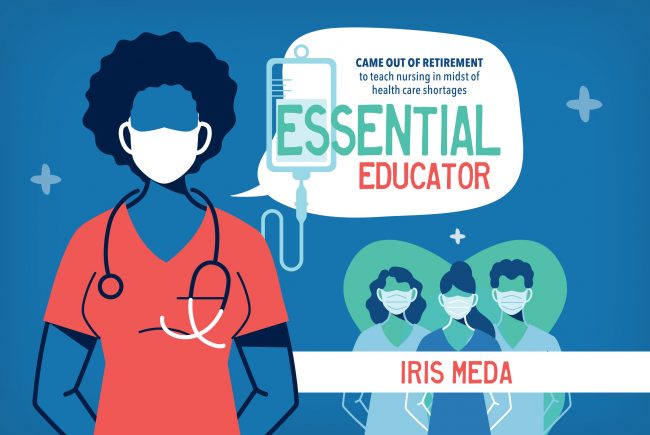 “She felt like if she could gain momentum by teaching some of those basics, we could contain any virus. She wanted to do something that would make a difference.” — Selene Meda-Schlamel, Meda’s daughter

At 70 years old, retired nurse Iris Meda returned to her teaching role in suburban Dallas to help train young students who might someday battle viruses that threaten humanity, like the coronavirus that causes COVID-19. Meda knew that returning to work at her age in the middle of the pandemic was risky, but she felt that she had no choice; there was an increasing nursing shortage and young nursing students needed her.

Meda was born in Charleston, South Carolina, but moved to Harlem, New York, when she was just seven years old. She never finished high school but received her GED from the University of the State of New York Education Department in 1976. She went on to complete her Associate Degree from Bronx Community College, and in 1984 received a Bachelor of Science in nursing from The City College of New York.

In her 35-year career as a registered nurse, Meda worked in hospitals, correctional facilities and nursing homes in New York and Texas, including Rikers Island Correctional Facility and the Lew Sterrett Justice Center in Dallas. She retired in January 2020 as a nursing clinic administrator with the North Texas Job Corps Center. However, when the pandemic hit the U.S. just two months later, she began to see the growing issues facing health care workers and knew she had to help. In August 2020 she became a professor at Collin College in suburban Dallas, working with high school juniors and seniors who were interested in nursing careers.

For months, she taught nursing basics to dozens of students in person. But in October 2020, a student unknowingly exposed her to the virus and in mid-November, Meda died of complications from COVID-19.

Her daughter noted that she was “passionate about education and equipping students with proper nursing skills to keep their future patients safe. She felt called to teaching and delighted in encouraging her students.”