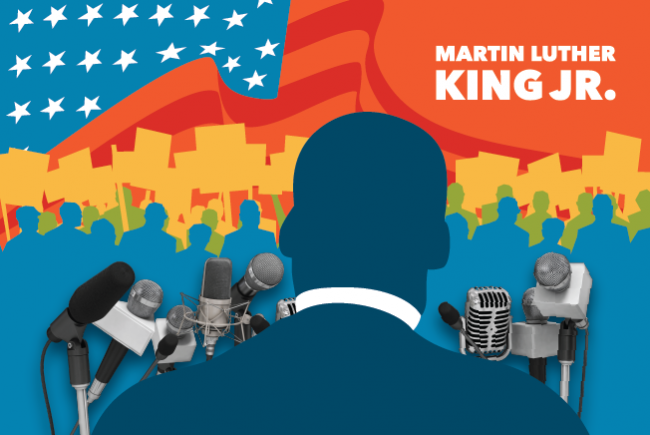 Our Communicator of the Month series showcases individuals whose voices have made a lasting impact on our country. In 2023, we recognize 12 Proponents of Peace who were dedicated to resolving conflict and envisioned a world without violence. Whether they advocated for civil education classes or found the common link between the civil rights and peace movements, the efforts of these activists mitigated hostile conditions in many of the world’s most divided countries — including our own. Their cooperative processes led to negotiation, reconciliation and growth — and are still teaching us how to connect back to our shared humanity, even in times of strife.

“Through violence you may murder the hater, but you do not murder hate. In fact, violence merely increases hate. So it goes. Returning violence for violence multiplies violence, adding deeper darkness to a night already devoid of stars. Darkness cannot drive out darkness: only light can do that. Hate cannot drive out hate: only love can do that.” — Martin Luther King Jr.

Martin Luther King Jr. was one of America’s most prominent proponents of nonviolence in both word and deed. His many speeches, sermons, lectures and letters promoting peace are still studied, memorized and quoted.

King’s dedication to his faith as a pastor and the teachings of pacifist leader Mahatma Gandhi guided him in his leadership of the modern American civil rights movement in the late 1950s and 1960s. In seeking social transformation for African Americans, he embraced many of the acts of nonviolent resistance modeled by Gandhi in decades previous, including protests, grassroots organizing and imprisonment: He went to jail 29 times.

King was one of the leaders of the seminal Montgomery Bus Boycott (December 5, 1955 – December 20, 1956) and the historic March on Washington in August 1963, where he delivered his legendary “I Have a Dream” speech to a crowd of more than 200,000 people on the National Mall. These events paved the way for passage of the Civil Rights Act of 1964 and the Voting Rights Act of 1965. At age 35, King was the youngest person to win the Nobel Prize for Peace in 1964 (a record not broken until 2014 by Malala Yousafzai, who was 17 years old at the time).

While King’s stance on nonviolence was well-documented by this point, he began making his anti-war sentiments known in March 1965 in a statement on voter registration in Alabama. After delivering several other interviews, sermons and addresses over the next few years that called for peace and affirmed his opposition to the Vietnam War, King led his first anti-war march in March 1967. Soon after, he delivered his groundbreaking speech “Beyond Vietnam — A Time to Break Silence” on April 4, 1967 — exactly one year before his assassination. In it, King spoke of a common link of injustice forming between the civil rights and peace movements, calling the Vietnam War “an enemy of the poor.”

Further in his speech, King laid out specific recommendations for the U.S. government to end the violence and seek peaceful negotiations in Vietnam. Members of Congress, the press, the NAACP and others criticized King for being so outspoken in his stance against the war, which was not traditionally seen as a civil rights issue. King remained undeterred, however, preaching against the war right up until his last-ever Sunday sermon. To him, the interrelated three evils of society — racism, poverty/economic exploitation and war/militarism — were at the heart of both the peace and civil rights movements in his country. Five years following King’s assassination, American troops withdrew from Vietnam.

Not long after his assassination in 1968, the idea of “Martin Luther King Jr. Day” as a holiday was proposed by U.S. Representative John Conyers (D) and U.S. Senator Edward Brooke (R). Together, they introduced a bill in Congress to make King’s birthday a national holiday. However, not everyone shared their enthusiasm, and the first bill fell five votes short of the number needed. Thanks to a little help from Stevie Wonder and six million signatures collected on a petition asking Congress to pass the law, it continued to be discussed. On November 2, 1983, President Ronald Reagan created a federal holiday honoring King. Some states resisted observing the holiday; it was only in the year 2000 that it was officially observed in all 50 states.

Martin Luther King Jr. Day falls on the third Monday of January each year (around his birthday on January 15) and continues to celebrate the life and achievements of this influential American civil rights leader and proponent of peace. To learn more about King’s legacy, read the following previous Vanguard blogs: